TRUCKIN ON DOWN THE ROAD

As the main aim of the game is to recreate real life in miniature.At some stage your going to need some trucks.But without going as far as the trucks taking over and the line being closed.
There are some really good ready to run models available ,mostly based on American trucks but with a little effort you can turn these in to Australian trucks.With that swinging 70/s feel
With placement at the loading bank,goods shed ,station or weigh bridge they help to recreate the scene
So here are some of my small collection. 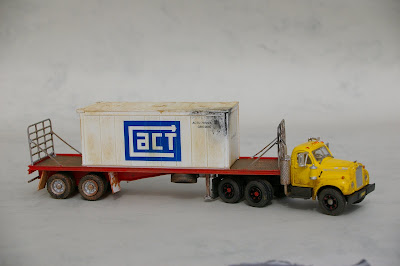 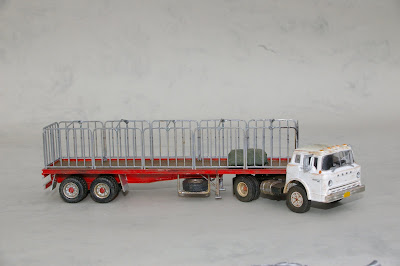 Both models are straight out of the box with some weathering.The trailers are scratch built using evergreen styrene and bits from the scrap box.The gates on the Ford are etched brass from Road And Rail as are the white metal gates on the Mack.The tarp is folded up painted tissue.And a suitable Australian container.Wheels and rims plus spare tyres are from Road And Rail. 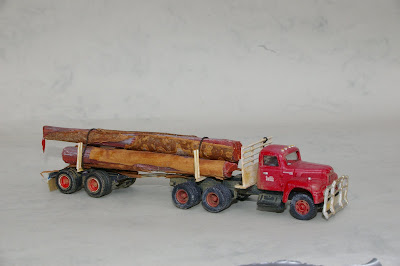 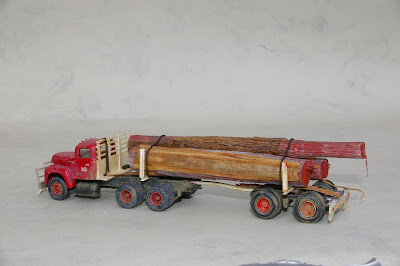 The logging truck a Mini Metals model started life as a boogie refrigerated truck.Once the refer was removed a rear head board was constructed from evergreen strip with chains draped over the boards.
And a white metal bull bar from Rustys for the front.
The rear jinker unit was scratch built from evergreen and scraps.With the log load from suitable sticks shaped and painted that raw red orange fresh sawn colour.With the bark being cinnamon sticks with some draped over the frame and rear.These are chained down and a red rag from paper bringing up the rear. 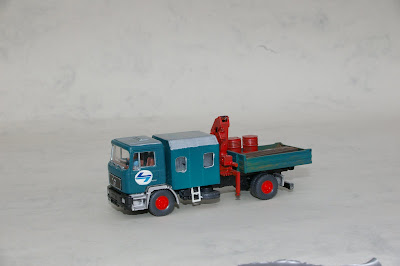 The crew truck started as a WIKING MAN Dump truck with crane WALTHERS 781-67502.
The tipping body was shortened with the hyab moved back from the rear of the cab and a crew cab made from styrene with clear being used on the window sides.
The original green was painted over with PTC blue and a decal put on the door.A load of drums and sleepers finished it off. 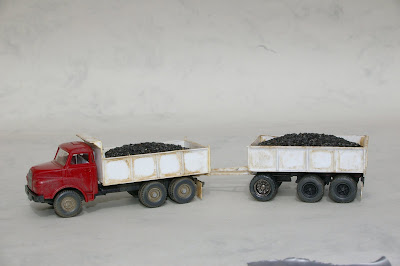 The truck and dog combo started as a WIKING dump truck 781-673.The tipping body looked to European so a new one along with the dog trailer was made using styrene and evergreen shapes along with ROAD AND RAIL wheels.
The body was left unpainted white, weathered and a load of Chucks Ardglen ballast glued down. 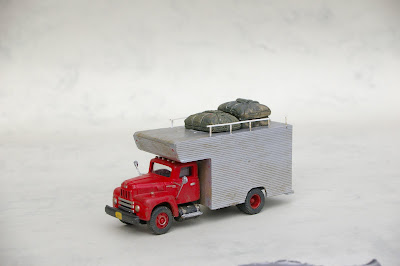 This is a MINI METALS IH single drive flat bed truck with the tray remove and a new panteck back built from styrene with mirrors from brass wire and styrene circles for mirrors.The tarped load on the roof is actually a left over 1-18 scale pilots parachute.This truck just says the70/s but totally out of fashion now. 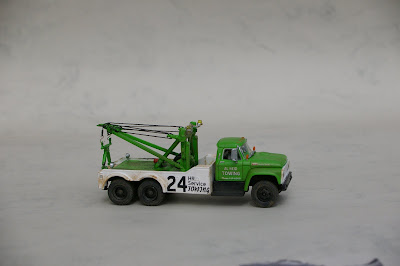 ATHEARN REID TOWING 91976 straight out of the box just weathered.With sign writing which is just at home in WAGGA WAGGA as WYOMING.Just check that area code. 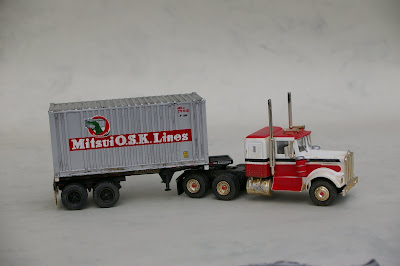 
I saved the easiest till last with all out of the box components.ATHEARN KENWORTH Prime Mover 92658 combined with MATSON 20FT Chassis trailer 27913 which comes as a twin pack so you get spare wheels for something else.Plus a suitable 20 ft container and weathering.

I will post some photos of the trucks in there natural environment soon.
Posted by BOLIVIA at 9:27 PM