LAYOUT CONSTRUCTION IN THE 21ST CENTURY

I read with interest all goings on of the technologically advanced modellers out there with there computer chips and 21st century gizmo's that are so much a part of the hobby these days.But when it comes to layout construction for some reason its back to the stone age or should I say the wood age.
With wooden frame work, L girders ,risers and like the yo yo, laminated road bed has made a comeback,don't throw those flares out just yet.
Why would you use wood with all the problems and extra work it presents when God has been so good as to give us steel and expanded poly styrene ?. These 2 products when combined give a layout section that is light , strong and unaffected by climatic conditions.With the added advantage of quick scenery construction.I understand some people cant weld but then again some people shouldn't be anywhere near sharp wood tools either .

Having used a steel frame on a previous layout ,but with the chicken wire and plaster technique the idea was improved for the new layout Bolivia.

With a 50 x 25 light gauge steel section being welded up for the main frame sections which where all of a common size of basically 2100 mm x 900 mm . giving the layout an overall footprint of 10.5mtrs x 2.1 mtrs.With the back board 900 mm high so as to get rid of any heads behind the scenes which would spoil the illusion of the scene.The track height of 1350 mm brings the models to eye level  which is the same view most people get of trains in real life .
Apart from helicopter and light plane operators.
Anyone who feels this is to high are very well catered for at the exhibitions I have attended with layouts that I feel are too low.This height also bring into play probably the most important aspect of the illusion which is to make the viewer move around to see the layout rather than standing at one end and having a panoramic view of the complete layout. As with every move the scene changes with the different angle and different things are obscured and revealed.Just as In real life. 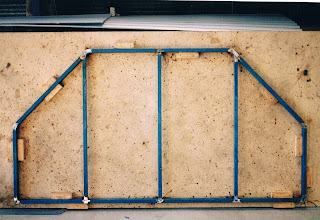 A centre section there being 3 in total 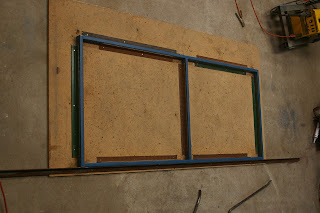 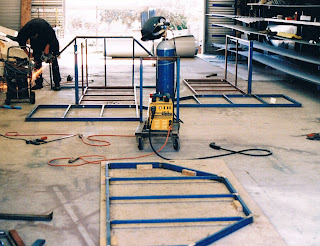 The completed sections bolted up and ready for foam. 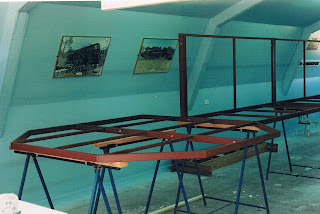 300 mm x 900mm x900mm pod form which is used under house slabs was used as the base foam .Being glued to the steel with a water based liquid nails.
Meaning that the track level is 300mm above the steel frame and level all the way around .Allowing the scenery to go below track level for valleys, embankments and rivers an important requirement in scenery that is nearly always forgotten.A level track improves operation and the scenery is used to give the impression of grades. 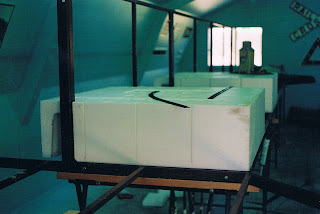 A road bed was cut from 10mm expanded polystyrene sheet with a bevelled edge to represent the road bed of the track. Then glued down using water based liquid nails  to the scenery base.The track will be positioned on this road bed latter and once aligned and super elevated held in position with pins until the ballast is glued down .So the track is only held down by the ballast (just like the real thing )
And as you can see the scenery is built up to suit your terrain. 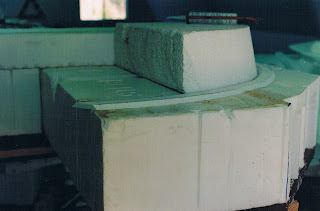 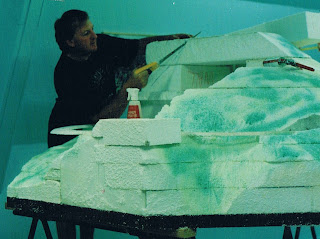 Who is that young man and what is he doing in my train room ? 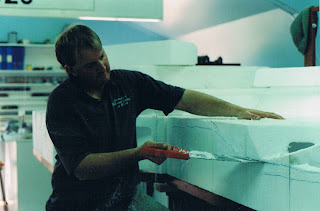 On the new sections (see also christmas report 2010) expanded polystyrene sheet 100 mm thick was purchased and was also cut to size by the supplier instead of using the pod form as I did have some trouble accessing some positions for point motors and signals.And this will give me a flat surface on the under side of the layout only 100 mm below track level.And the foam can be dropped down by 100mm if a river is going to be put in so not so much foam has to be cut away.As can be seen the custom wood (yes I did use some wood ) back boards ,side and end skirts  where fitted at this stage to speed up construction latter in the train room.
The finished sections are very light and easy to handle
On some smaller layouts the expanded polystyrene could be used without any framework and can span a long distance without any support. 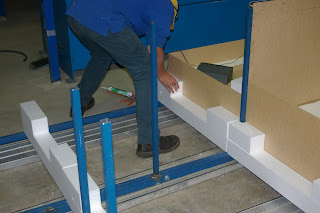 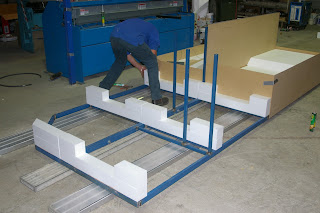 The layout frame work sections are  bolted together .Which when done makes for a very strong layout so much so that a lot of the trestle supports could actually be taken out.The bolts 3 per section also act as the only method of lining up the track work . Being a very stable material once bolted together the rail joiners are slid across to join the track . So no fancy dowel or pin methods are needed.
The scenery was built up and carved out then once the desired shape is there the granite rocks where coated with a smear of plaster to give the right texture.And other areas where coated in no more gaps mixed with a paint tint and water so as to be brushed on to seal the foam before adding the grasses and dirt.


Gee dad your so clever , When I grow up I want to be just like you ! 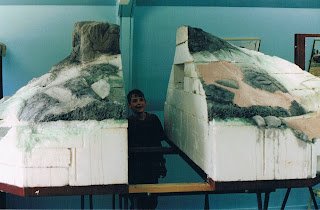 Some people have a bet each way and go for the wooden frame work, risers and track bed and then use  foam for the scenery.But I think its about time to use foam only.
We have put a man on the moon you know ! 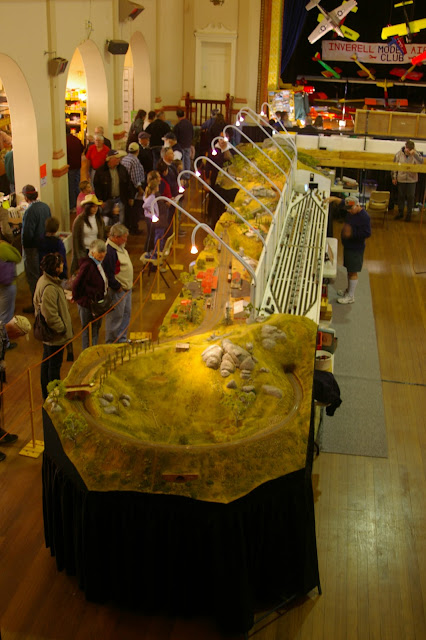