LIGHTS ON THE HILL TRUCK STOP

THE AMPOL TRUCK STOP IN GLEN INNES  PLAYS HOST TO 2 X BRAMBLES WIDE LOAD SEMIS IN 1977 HAULING EUCLID DUMP TRUCKS SOUTH .THE TRUCKS WAIT  WHILE THE DRIVERS REFUEL AT THE ALL NIGHTER . THE FRONT TYRES FOR THE DUMP TRUCKS ARE IN THE DUMP BODY.


A long time ago I started to build a generic Australian Petrol station.With a truck stop style servo ,which would be positioned on a raised section of the layout towards the backboard .Showing some of my truck models in the parking area .Which would be opposite the servo with a road from the back to the front of the layout section with a road over bridge at the front to carry the road over a cutting for the rail line.This was to form a transition between Fraser River Gorge and the town of Ashford 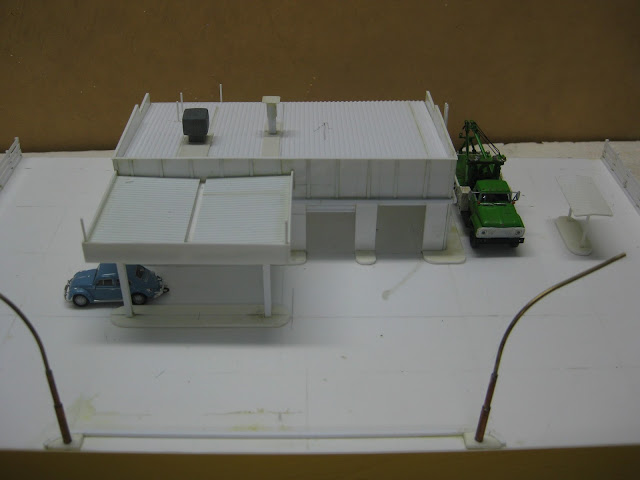 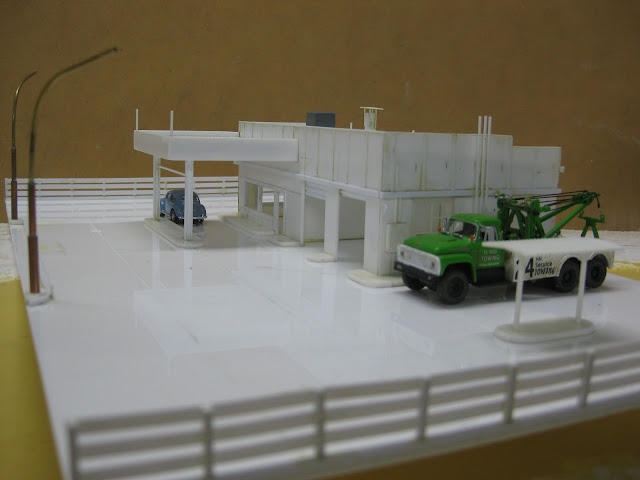 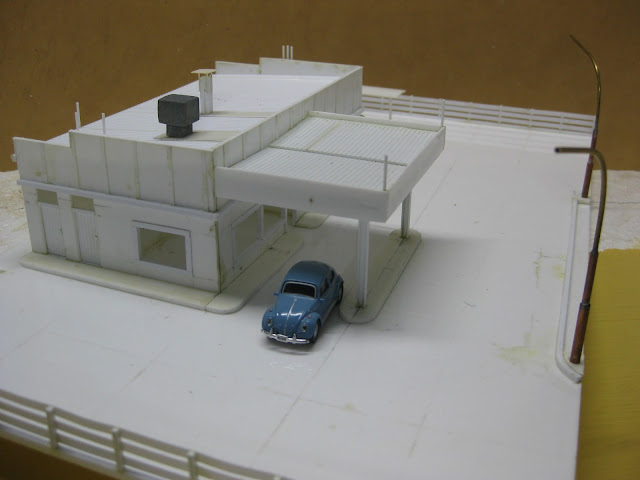 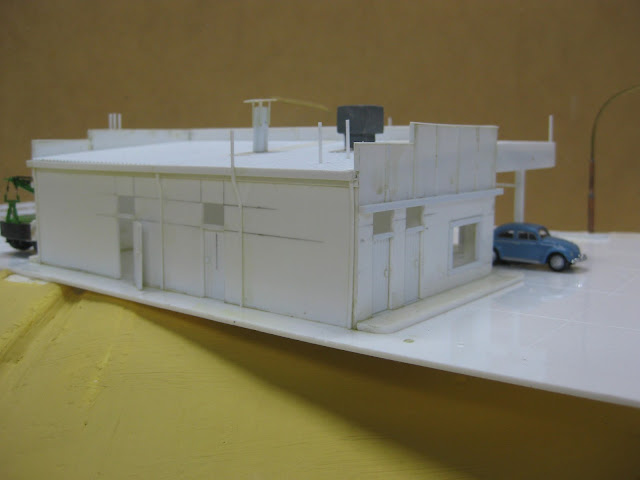 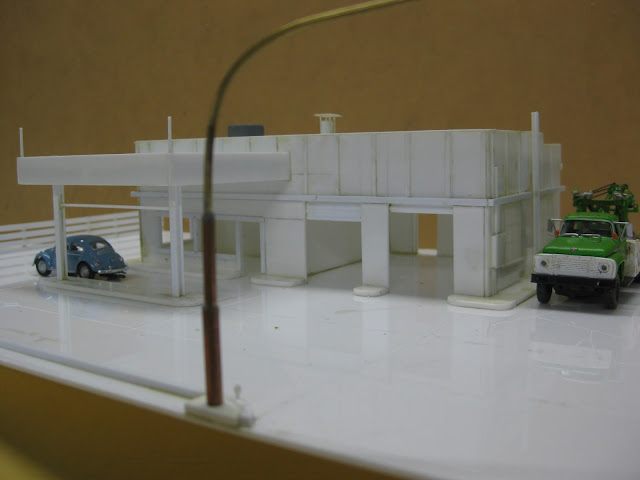 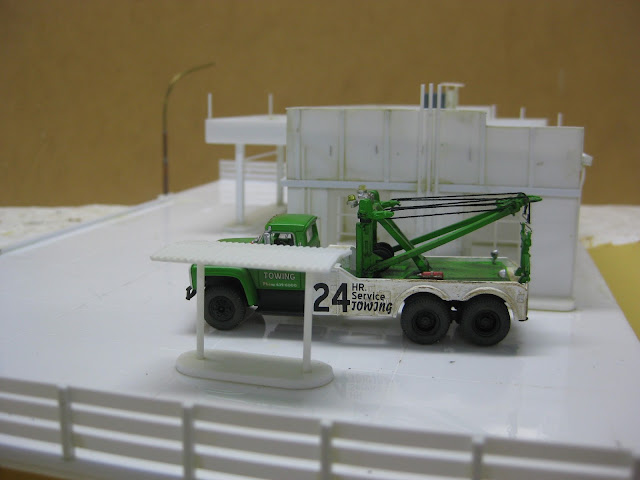 It stayed this way for a long time with the problem of what branding to put on it .ESSO was going to be the winner in my mind.But then I realised you cant get more Australian than Ampol or Golden Fleece.With the latter being in the 70,s the favored place to pull up for a decent feed when on the road with there roadhouse style restaurants,which could be probably called Australia's original fast food chain. Before the American invasion .
The brand of Golden Fleece was owned by H G Sleigh &  company from 1947 to 1981 ,when it was acquired by Caltex which led to its brand being removed from the landscape.
Golden Fleece operated rail tankers which served country depots served by rail.Glen Innes being one of these.I don't have many pictures of the depot in operation,but here is one from 8-5-83 before the storage tanks where removed. 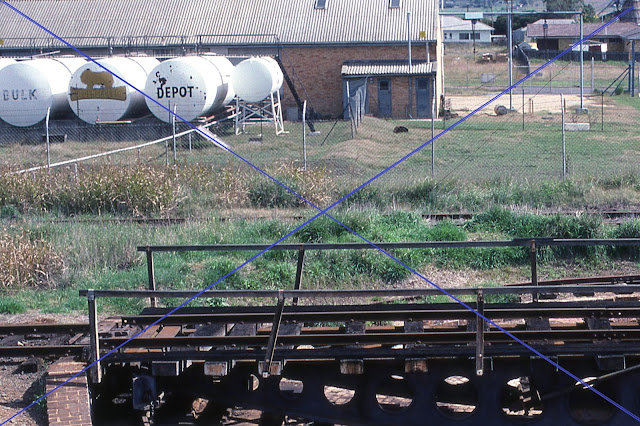 And some a bit latter with the storage tanks removed. 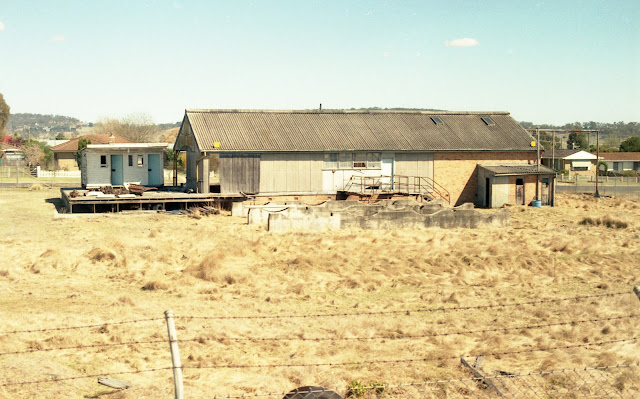 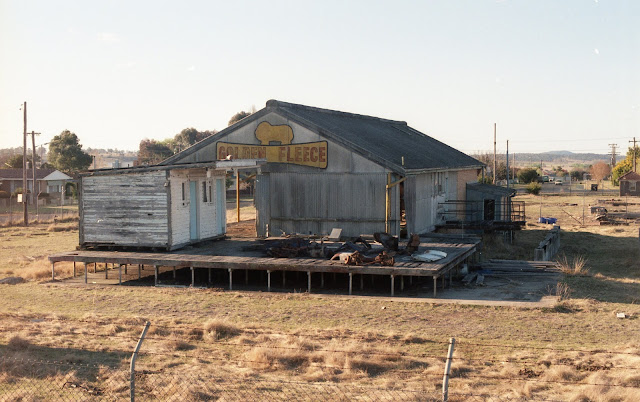 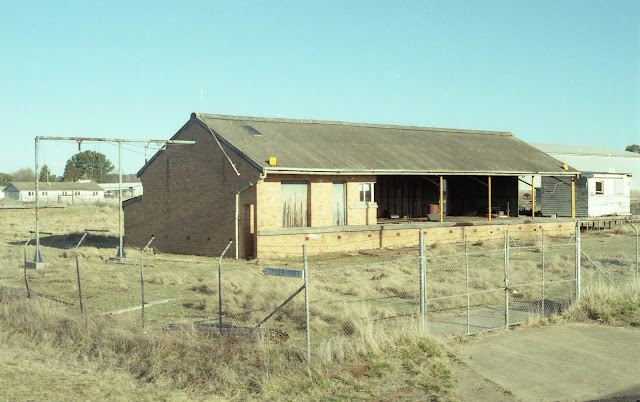 This shot is of NTAF GF21 at West Tamworth on the 9-8-83, Bang on my time period.
Beam me back Scotty !
With some very professional sign writing on the ends. 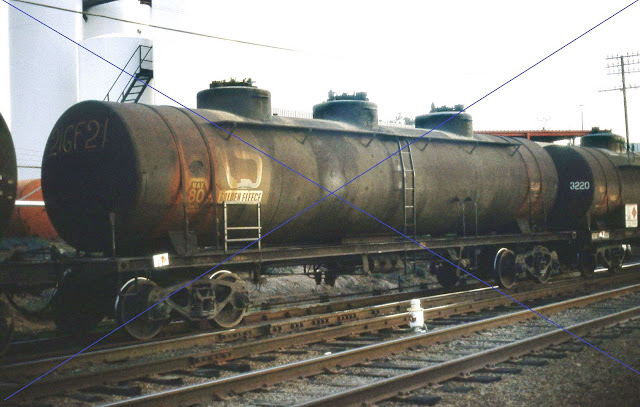 Over Christmas I did some looking on the inter-web for any suitable signage.Which was rewarded by coming across Rakem Emporium ,an Australian outlet which produces petrol station signage and also card stock kits of various buildings. The shop had a set of Golden Fleece signage suitable for my servo.But I wanted the restaurant overhead sign .On contacting the proprietor about this she did up the required signs in no time and sent with my original order.
These signs are not decals but printed on paper,so if you need a particular sign , this would be the place to go.
http://rakememporium.com.au/

So now I have a finished servo ready to scenic into place.
I made the flag bunting on brass wire with paper shapes painted to liven it up.And got rid of some OO scale VW I had in the Garage area.
You will also note the Road and Rail Resin  ACCO which although just assembled ,has developed a very nasty oil leak.
https://www.roadandrailresin.com/ 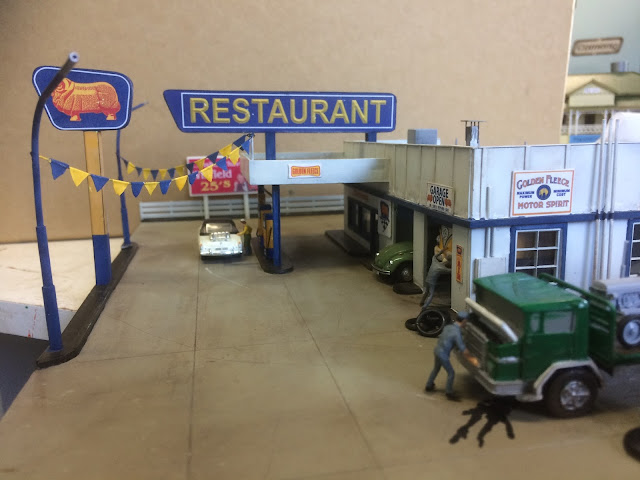 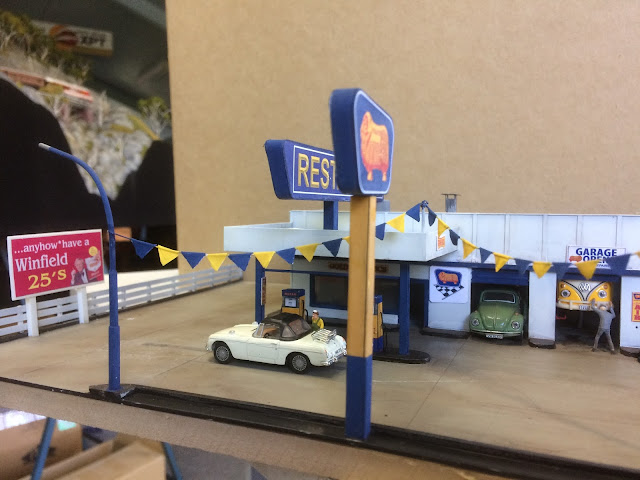 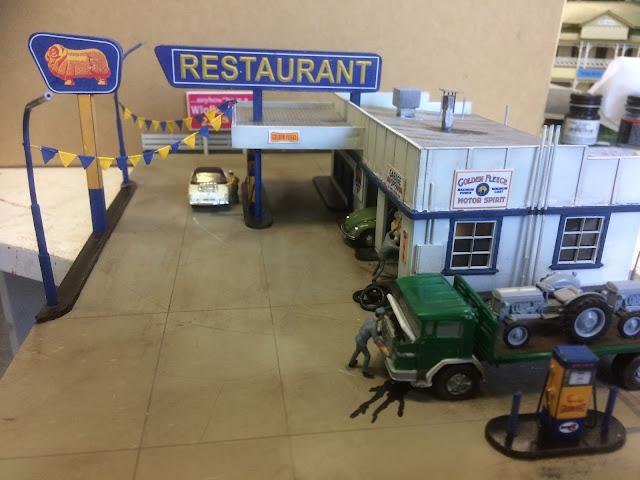 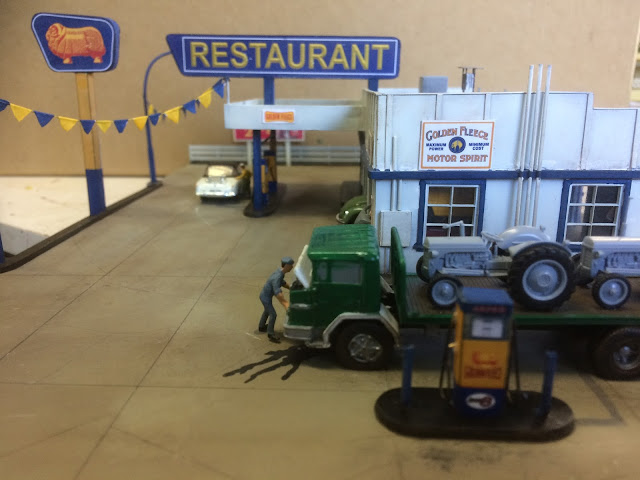 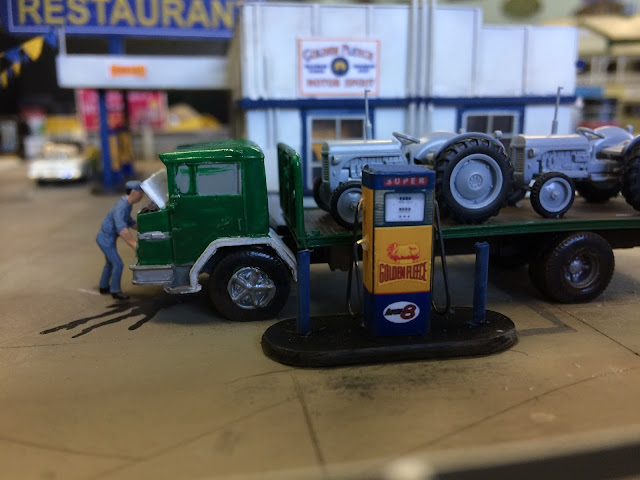 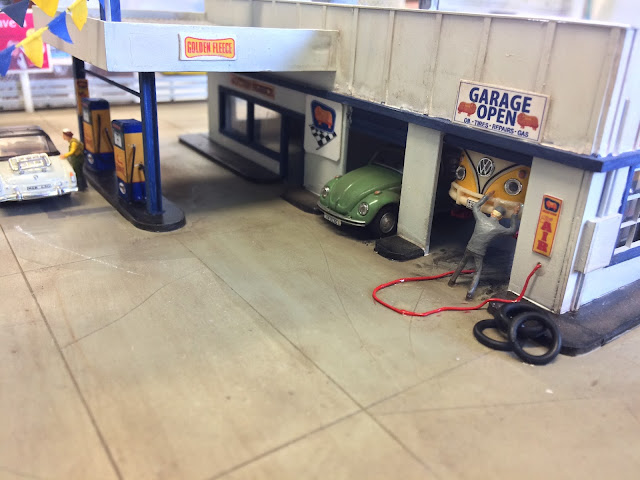 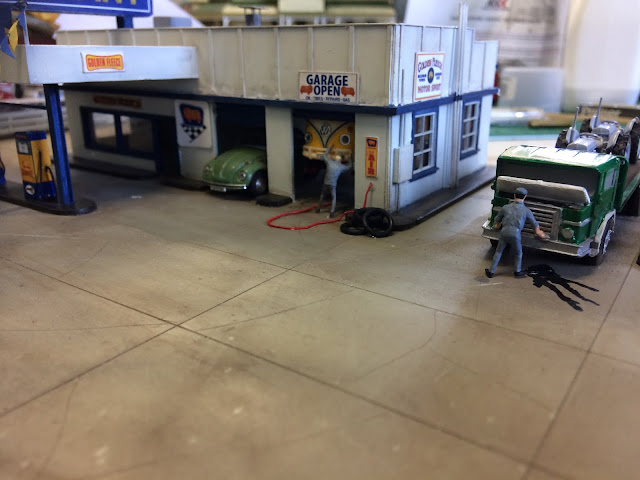 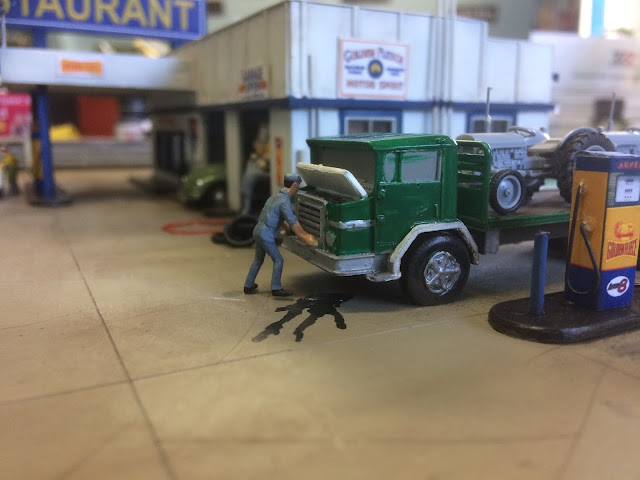 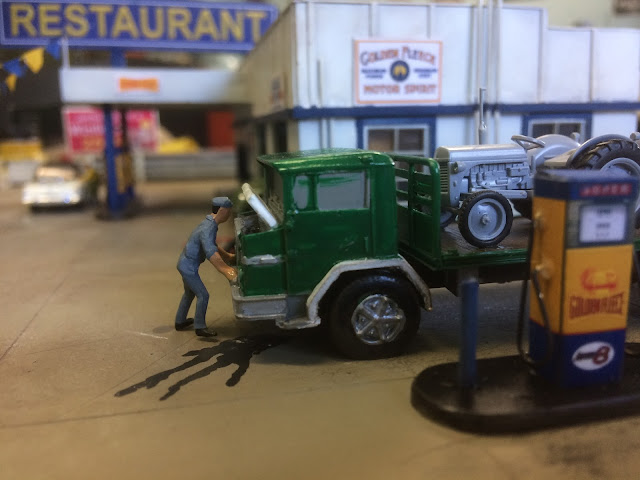 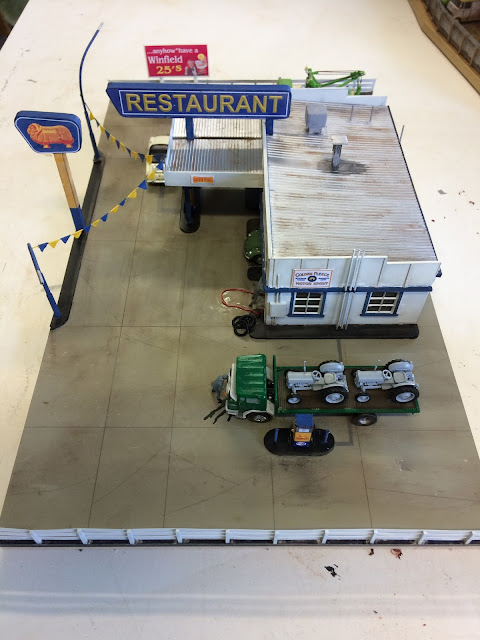 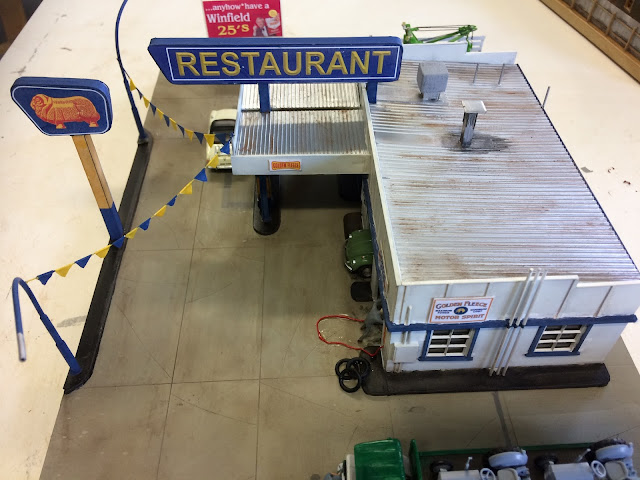 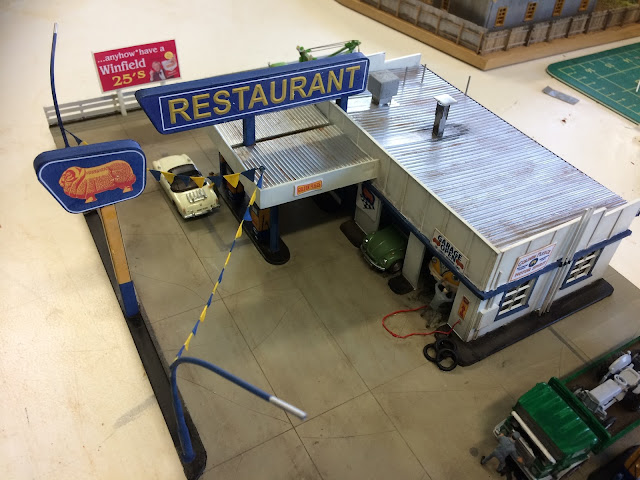 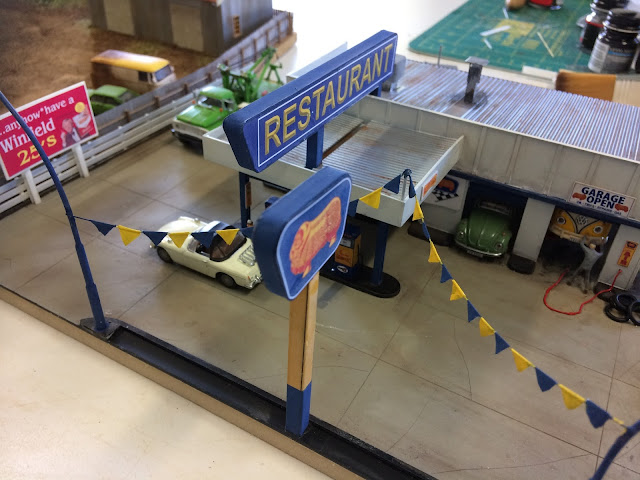 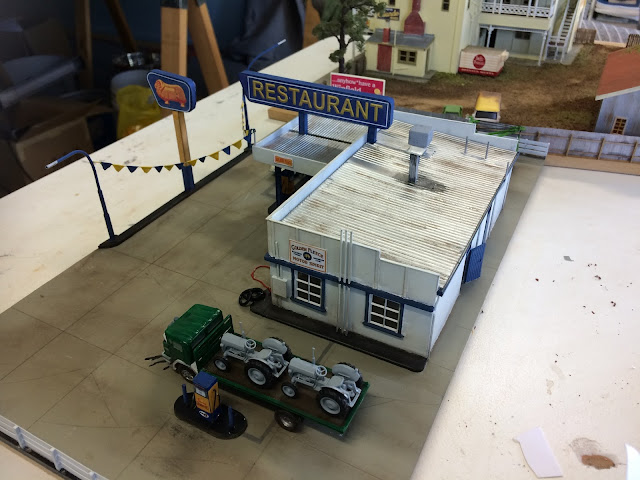 Some shots of the area where the servo will live. 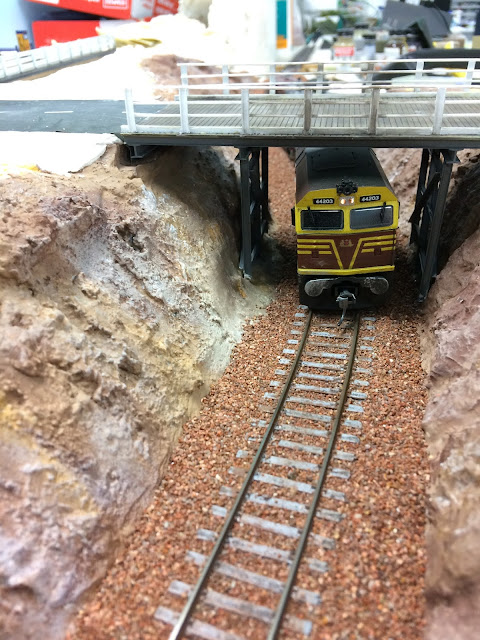 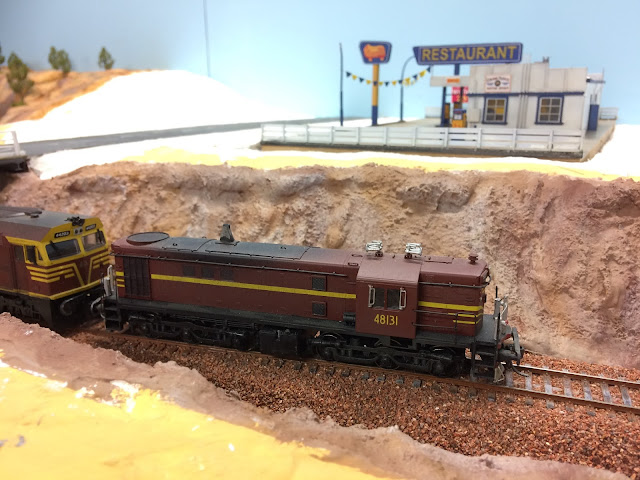 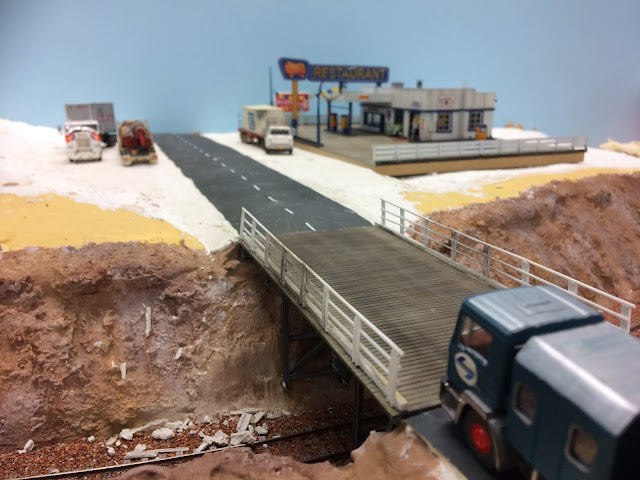