THE END OF THE LINE MUNGINDI STATION .BUILT IN 1966,TO REPLACE THE ORIGINAL BUILDING DESTROYED BY FIRE IN MAY 1962.SUPPOSEDLY THE FIRST AIR CONDITIONED STATION BUILDING IN NSW .


One my latest tour of duty towards QLD .As I had previously photographed the remants of  MUNGINDI station area.I decided to leave that alone and venture into the scrub not far off the Carnarvon Hwy ,10 Ks south of MUNGINDI ,near NEEWORRA .This is defiantly a dry season exercise.
According to my map there should be a crossing of the river for the rail line.
And there is ! Was ! Still is ! But isn't ! Well there's actually two !
Originally there was a very long trestle approach from the south , to cross a 3 girder Web span on the small tributary  the Whalan creek .And then some more timber trestles before crossing the Boomi river ,with a 120 ft steel girder bridge from 1914.Then some more timber trestles across the flood plain towards MUNGINDI to the north.
The Whalan creek runs parallel to the QLD border for some 100 Ks up stream from the bridge towards the East.
It merges with the Boomi River slightly downstream but very close  to the bridges ,The Boomi River also runs parallel with the border but slightly to the north of the Whalan .And South of the border river the Barwon.
The Boomi actually has two connections with the border river  the Barwon .To the East it joins just as the Macintyre turns into the Barwon and runs parallel with this river for some 120 Ks  to rejoin it  about 30 ks to the west of Mungindi.
If your confused about all this check out  the map .
I know I am !
The map shows the junction of these two water courses upstream of  the rail crossing ,but its actually downstream of the rail crossing. I think. 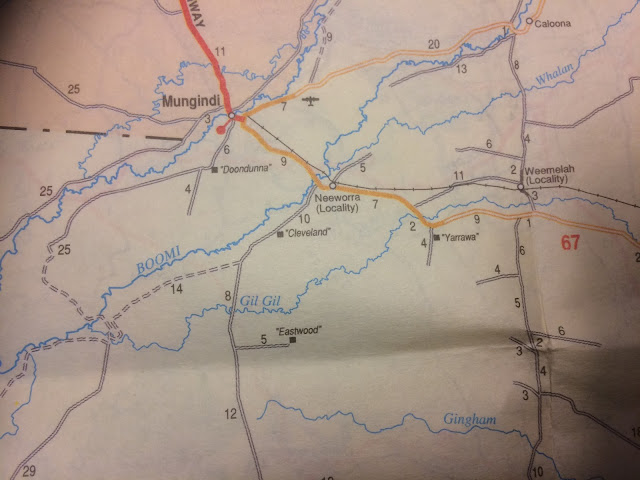 These rivers are very seasonal and for most of the time are Muddy green puddles ,But come the rains turn into large rivers draining large areas of the black soil plains .
The bridging of these two rivers /creeks was a very long and large piece of infrastructure on this otherwise plain branch-line.
Most of the wood trestles has gone leaving only the concrete and steel work.When you come across it in the scrub it seems to be extra large ,with no track or approach spans.


THE MAIN CROSSING OF THE WHALAN CREEK
FROM THE NORTH ,LOOKING SOUTH 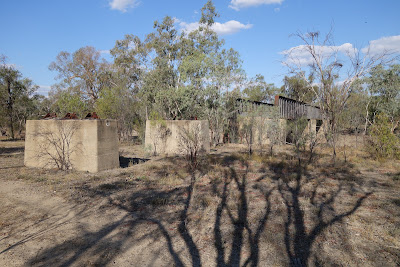 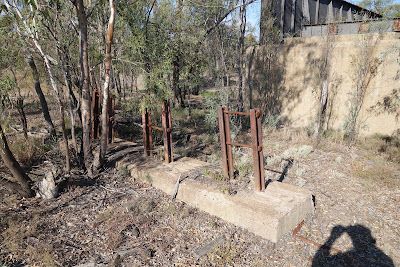 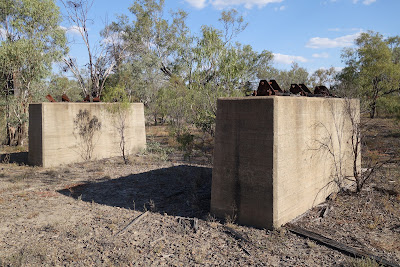 LOOKING NORTH TOWARDS THE BOOMI RIVER 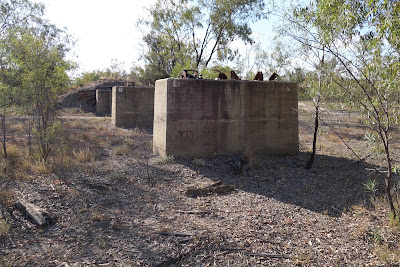 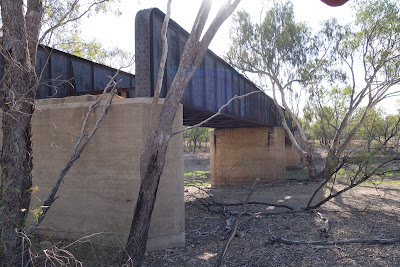 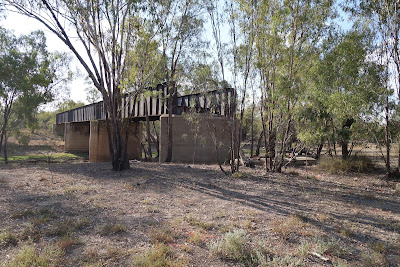 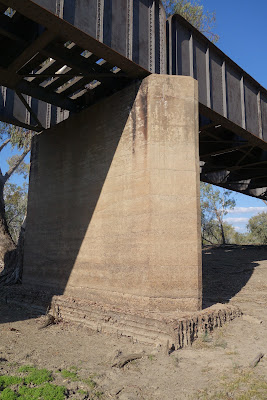 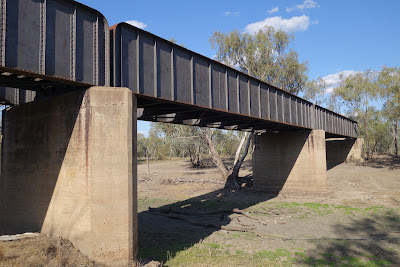 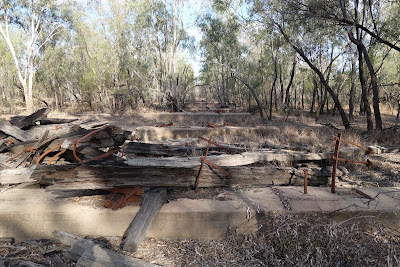 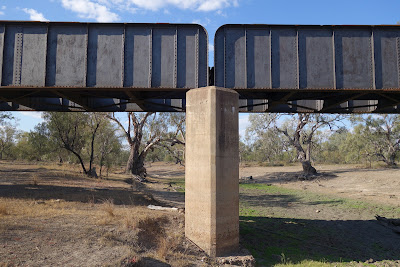 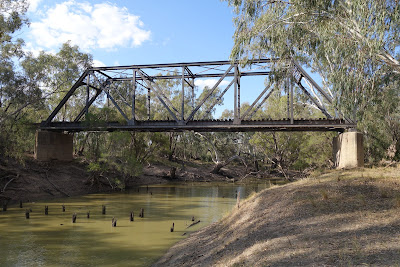 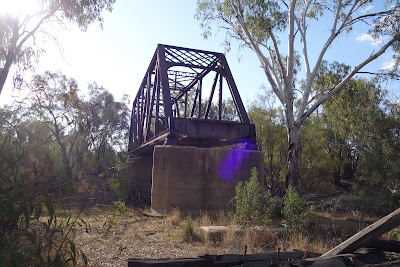 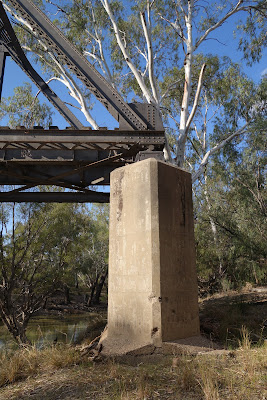 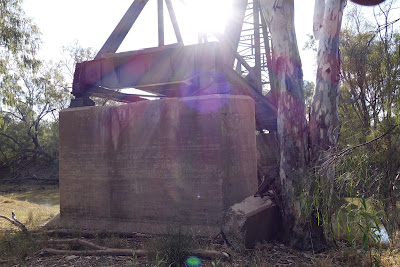 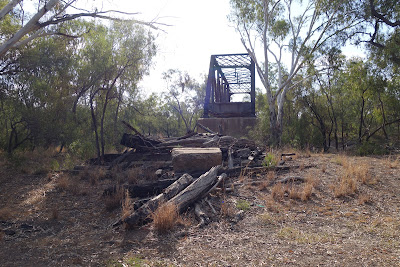 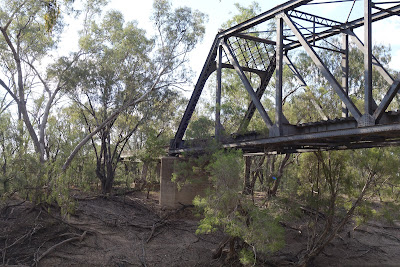 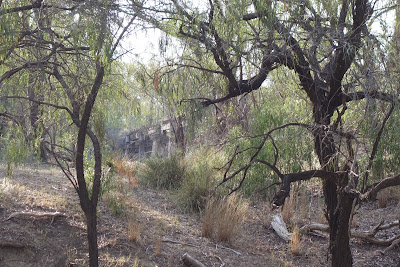 The other crossing of note on this line is the Gil Gil Creek .Not far off the highway ,near a level crossing at BENGERANG Which comprises of flood plain opening, and a Large long timber trestle bridge .Which I modeled because of the 3 different pier styles.And different opening spans.
This Creek  starts up near CROOBLE on the BOGGABILLA line and runs west joining and following the MUNGINDI line for about 60 ks ,before joining the Boomi river about 25 Ks west of the first two bridges on the Whalan Creek and Boomi River
Once again consult your maps.
Not to confuse you .But the Wallon creek (slightly different spelling ) is a tributary of Gil Gil creek . 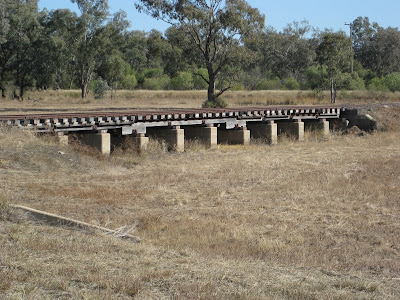 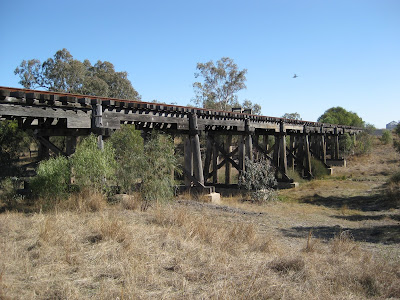 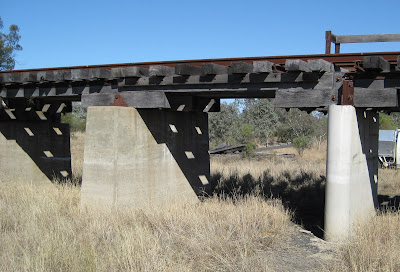 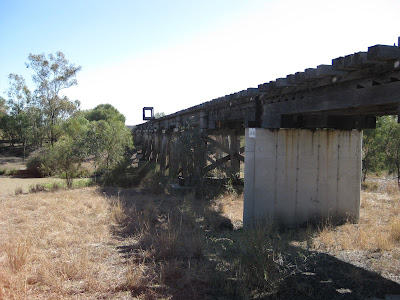 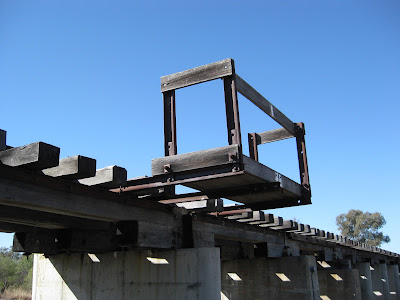 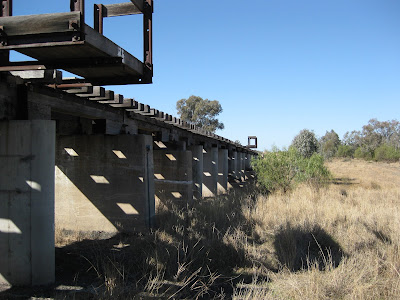 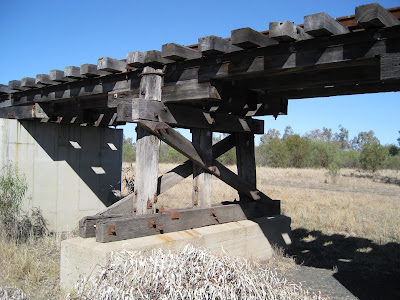 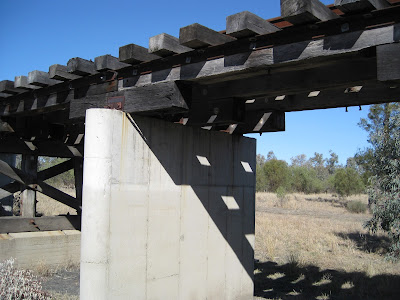 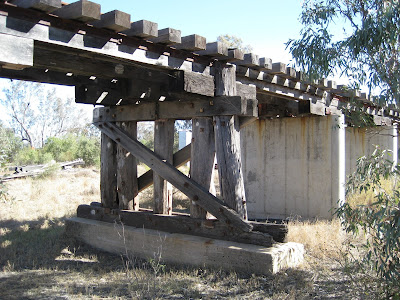 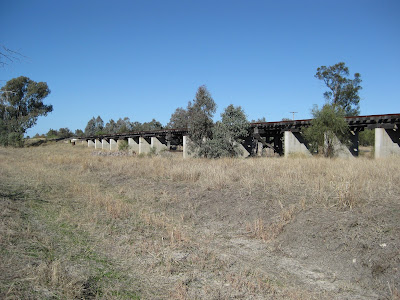 The MUNGINDI terminus's last train was on the 5th of Jan 1974.Followed by flood damage from a large rain event over Southern QLD and Northern NSW during Jan 1974.Which closed the line.