Most of us have a list of rolling stock we would like to build in the future. Most of the research or photos of the prototype have been sourced over the years .With maybe a important part of the puzzle missing .
I too have a list which now is one item shorter.
The welded rail train has interested me since seeing  it in NORTH UNDER STEAM by ROBERT DRIVER.
On page 39 A loaded train with other goods wagons on No 533 goods is shown near Bulliac on the 15-12-68 coming around the curves.The wagon set although hard to see shows 9 wagons with the rail in 3 layers.The text says the rail is 400ft.
After recently reading the excellent new book THE HAWKESBURY RIVER RAILWAY BRIDGES By BILL PHIPPEN .Some more pictures ,this time closer and more detailed appear. This time a dedicated train is shown ,with 10 wagons plus a S truck and guards van at either end .The additional 10th wagon I presume is for the requirement of length of the track to be determined by the bridge truss span . As the rail has a join and expansion joint over each pier .As the bridge ( Hawkesbury ) has 2 spans of 445ft 8 "this accounts for the additional wagon.The other 4 spans are  347 ft 6"and the shorter standard 9 wagon train would of been used.
These pictures reveal the train to be made up of  E type flat wagons . With a wooden bulkhead at each end wagon.

A very good article is also in the Jan 1960 RAILWAY TRANSPORTATION magazine.This explains the evolution of rail welding and the different lengths that have been trialed and the standardization in NSW of the 360 ft length..Also loading the rail at the Chullora rail welding depot ,from where it was transported around the state by the welded rail wagon set and the unloading method. 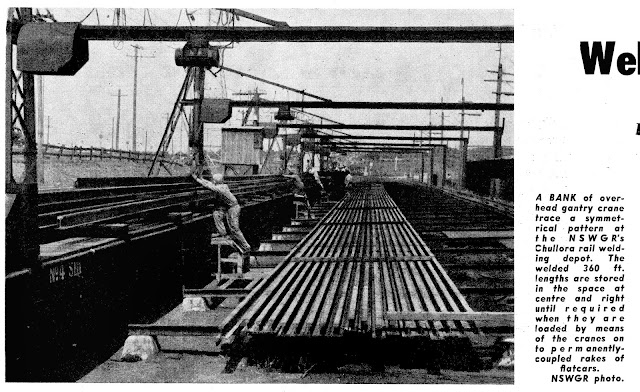 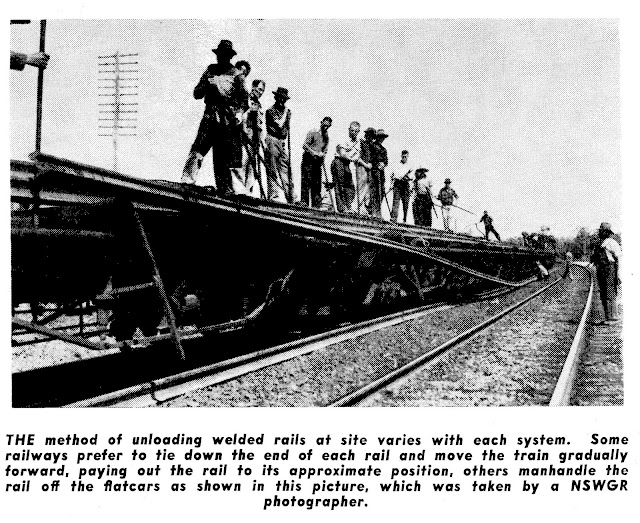 Another article of interest is in RAILWAY TRANSPORTATION from October 1964 titled Big Trains Speed Up Track Renewals .This covers the upgrading of the Junee to Albury line to class 1 standard with 107 lb rail . 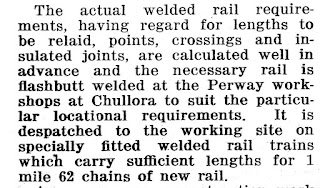 
Another article in RAILWAY TRANSPORTATION, March 1961 titled Track Relaying in Australias Longest Tunnel shows another unloading method used in the confine's of the tunnel .With the rail unloaded from the end of the trailing flat car using bell mouthed guides.The rail is fixed to the existing rail and the train moves forward ,leaving 2 x 360 ft lenghts in the 4 ft ready for replacement.The end wagon has its buffers removed. 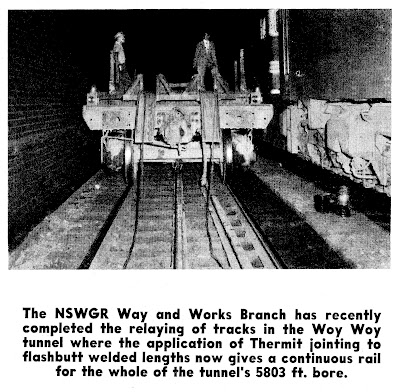 So now I have enough information to be able to construct the train in model form.The missing items now are.
1 - wagon numbers for train.?
2 - suitable wagons.?
3 - flexible lengths of rail ?
4 - The engineering required to make this work in the more restrictive HO scale world ?

Enter stage left Joe
We all know Joe from Casula hobbies , This man has a lot to answer for in my case ,I bought my first brass loco from him a 79 class , mail order in maybe 1975? for the price of $70 I think .Well Ive had to buy a lot more stuff since then to go with it.
When I found out he was producing the E wagon ready to run.I got all the research out again and got excited.
Trials with different rail for flexibility proved normal rail wouldn't work on the wagon set.And then I found a supplier of extruded scale plastic rail in long lengths. 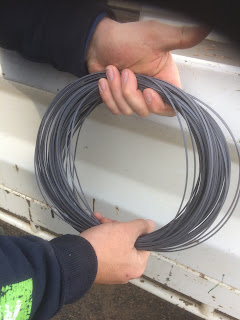 After talking to Joe about the possibilities of this ,He arranged to get 9  pre- production samples of the E wagon  imported for me to start work on the rail set. For possible display at Liverpool,this obviously didn't happen in time .
The wagons are very good and after making the end bulkheads and adding extra weight under the deck and weathering .Work started on adding the rail.The prototype length of 360 ft does not work in model form which I soon found out. .And has to be increased to 374 ft .This is because of the Un-proto typical distance between the wagon when fitted with KD,s.as opposed to the screw link coupling used in real life where the wagons are pulled in tight against the buffers.For the rail to work it also needs to be fixed on the center or 5th wagon , So that as it moves through curves the rail grows and retracts on the sides of the wagon as with the circumference of the rail curve from one side to the other.Which in model form are much sharper curves than real life,and restricts the train set to 36inch radius curves.This could be made sharper but more allowance would have to be made for the growing of the rail.With the rail fixed in the center this movement is halved and the rail returns to its start point rather than creeping to one end . 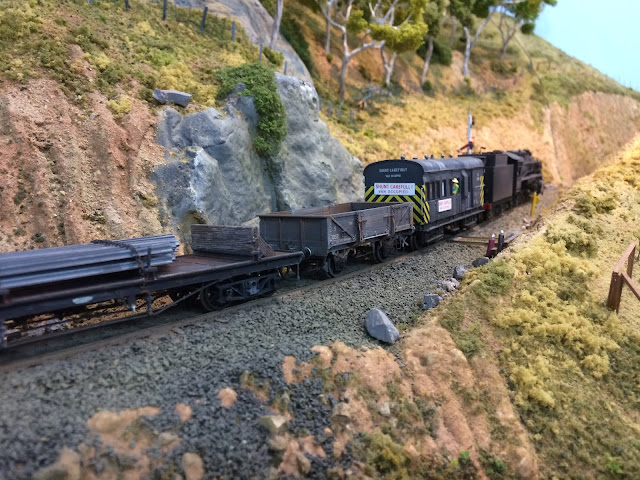 The ends of the rail also need to be positioned before fixing half way between the last bolster and the end bulkhead.With enough overhang on the bolster as not to get caught when retracting on curves and catching.
Upright brass rods where drilled into and positioned on the bolsters as guides for the rail to move through.And one layer of rails ( 10 ) was installed .Then a wooden glut was drilled and positioned on top of the rail to hold them down in position with some clearance for movement.Then the  next layer of rail added.As this was the last layer no glut was used .But 2 chains per wagon  (27 links per inch ) where used to hold the rail down in position with enough slack to allow free horizontal movement .
Trials were conducted with a few modifications to bogie screws and the liberal application of graphite to all moving surfaces . 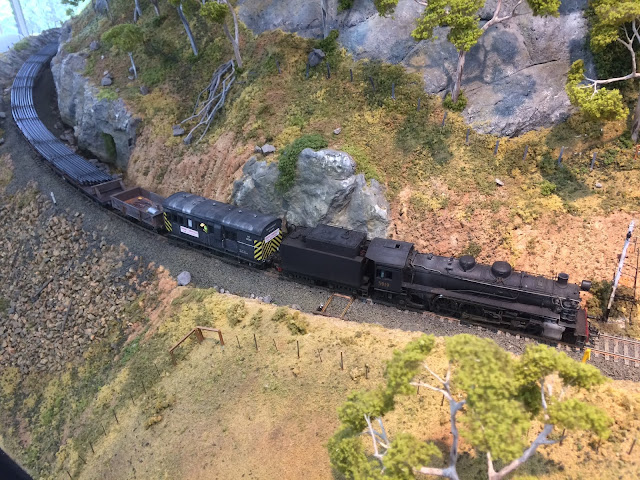 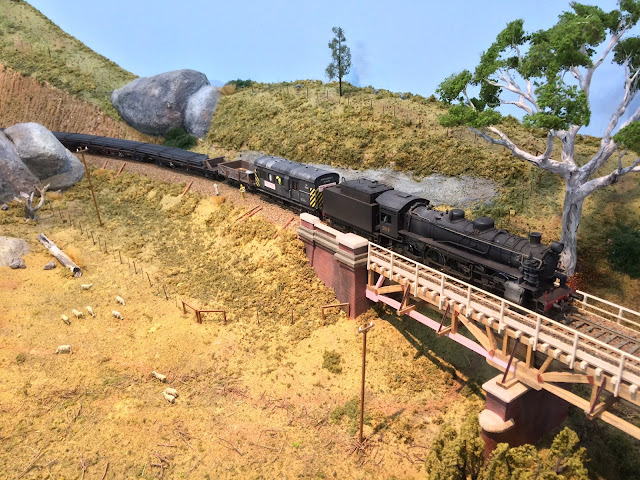 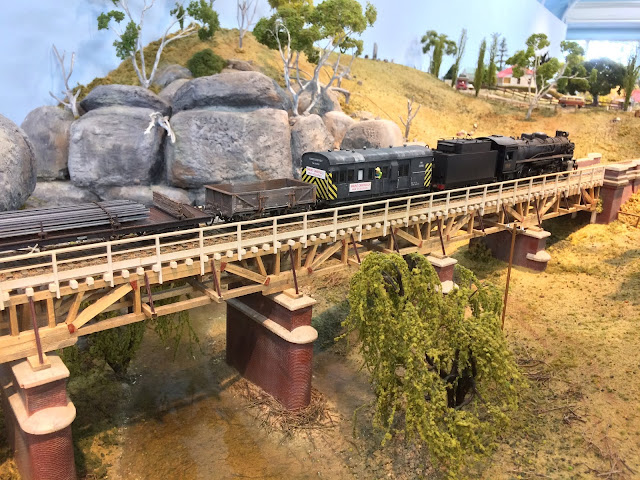 One problem that becomes apparent early on is that this 1400mm long train becomes hard to handle and un devisable.I had to constructed a trough out of Aquaplate steel sheet for this .This material has a plastic coating on it ,which helps with no shorts when placed on the tracks to remove or add the train to the layout. 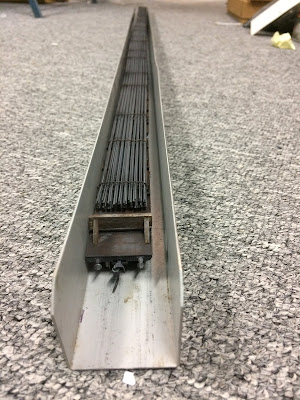 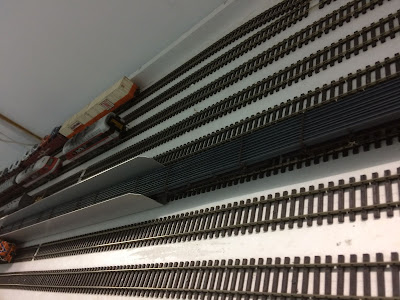 After fine tuning the train works and will negotiating points, curves and reverse curves with no problems.I would change the fixing of the rails on  the center wagon, to just the 2 center bolsters as when fixed to the 4 bolsters the adjacent wagons on curves try to lift to bogies off the track. 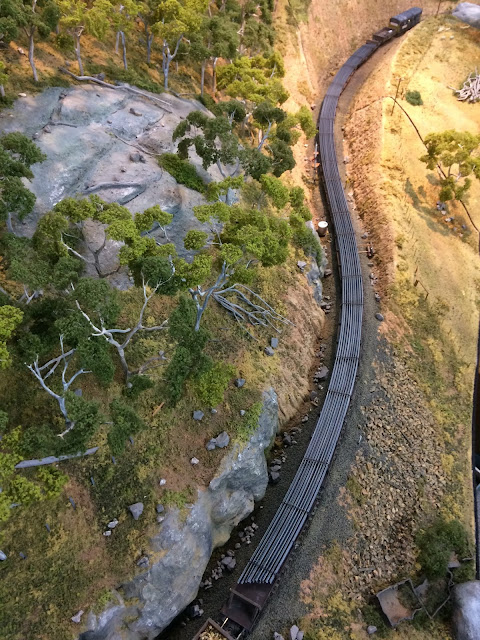 One thing I haven't worked out are the wagon numbers as yet ?
Is there anyone out there that can help ?
But with the addition of a couple of match trucks and guards /workers vans at each end ,it makes an interesting train.I have been using a 59 for the loco as in the 1968 pictures .


But I presume I can diesel haul it with early diesel types. 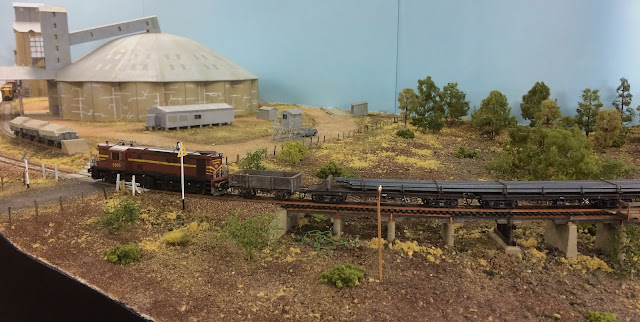 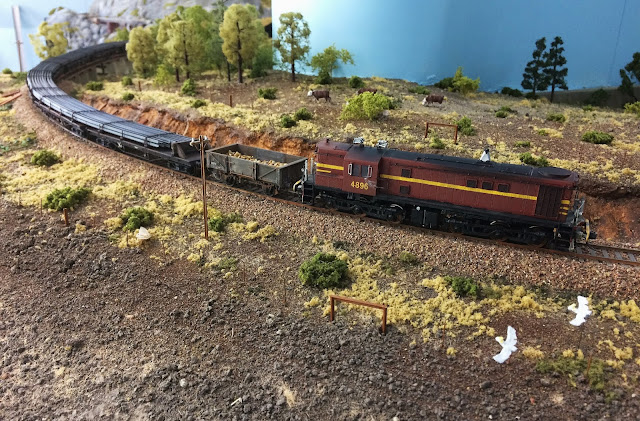 I'm not sure of the time when this train would have been retired and upgraded to a more modern version ?One thing you can be sure of , this transport task would not be outsourced to the trucking industry. 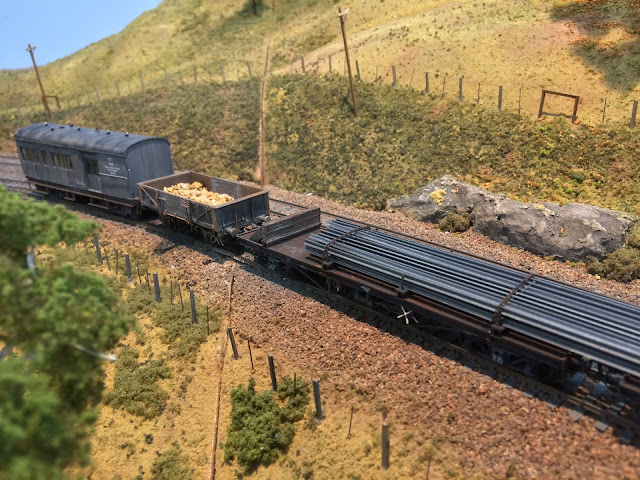 The train will be on display at the Armidale Convention this year.And all the necessary components to construct it will be available from Casula Hobbies in time.
So give Joe a call .His operators are waiting to take your call .  http://www.casulahobbies.com.au/catalog/