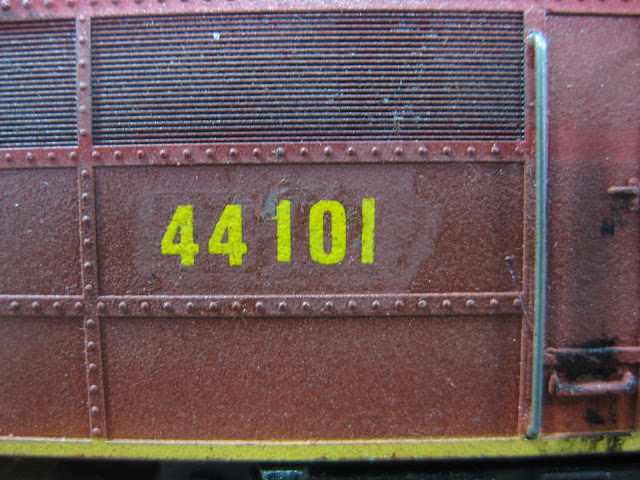 One of the more interesting locos that operated on the NSW rail ,if only for a very short time came about from the tragic accident  that occurred west of Parkes at Mellelea on the 26th October 1974 .
2  locos  where involved in a head on with the up freight headed by 4476 coming in to cross the stationary down freight headed by 4478.Both locos where No 1 end leading and the forces involved ensured that both locos where write off 's.
On removal from the accident site the locos were sent to Cardiff workshops where the they could be assessed and stored safely from the public's gaze, from what was an embarrassing incident for the Railways.
After inspecting the damaged locos the plan was to cannibalize the damaged locos for any usable parts from what where 2 relatively new locos with 4476 entering service on 18-11-66 and 4478 on 23-1-67 .
Then the staff decided it would be better to use the locos as the basis for a hybrid loco which would combining the two undamaged No 2 ends to create a box cab loco similar to the newly introduced 422 and 442 class of locos.
As the loco's had already been written off the project was undertaken as a fill in with work taking place only when time allowed.And also as no official permission had been granted for the project the work was a closely guarded secret in the Cardiff workshops.
The loco eventually became a reality and it was a very proud staff that saw the loco completed and numbered 44101 to represent a new class of loco if only one strong.
The loco shared all the same equipment and specifications of the 44 class from which it came from.
The trials for the loco had to be keep secret until its existence could be made official.So under the cover of darkness the loco ventured out of the workshops onto NSW rails for the first and what would be the last time .
Arrangement's had been made to trial the loco on the neighboring Richmond Vale Railway system .
The loco performed faultlessly reaching Minmi Junction. Before after some minor adjustments the loco set out for the return journey.Unfortunately the higher than normal axle load of the new loco had caused damage to the track on the outbound leg which had gone unnoticed in the darkness and as it retraced its path tragedy struck with the track spreading under the weight of the loco and sending it toppling off the embankment and into the waters on the Hexam Swamp. 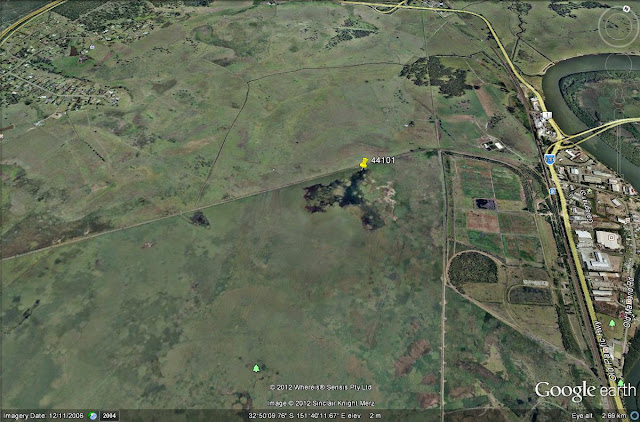 Luckily no serious injuries occurred (Apart from the results of serious attacks from the Hexam Greys ) and as the crew and Cardiff workshop staff on board the loco scrambled to safety,the engine began to settle into the  soft mud of the swamp ,finally coming to rest parallel to the tracks and laying on its side nearly fully submerged.
By next morning accident crews where on site where plans could be made to retrieve 44101 from its resting place.
Due to the narrow embankment ,lightly layed line and inaccessibility of the site, the heavy lifting cranes required could not be used .And as investigations of how to extract the loco became more complicated the 110 ton loco settled further into the mud becoming fully submerged and firmly stuck in the muddy bottom making any hope of retrieval impossible.
On a field trip to the site in Dec 2011 no trace could be seen of 44101 but small traces of oil or diesel could be seen rising to the surface marking its resting place very much like the USS ARIZONA at PEARL HARBOUR.During the drought the loco may have been visible but this chance is lost for the moment.


With this information I set about making a model of this unique loco.I haven't been able to uncover any drawing or photos so the model is based on what I think it would of looked like.
Using 2 Lima 44's cut and joined, detailed, painted an numbered then mated to a dummy version of the Lima chassis using the 2 unpowered bogies. 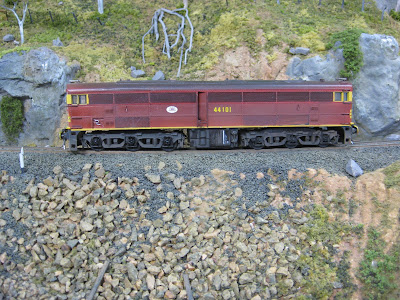 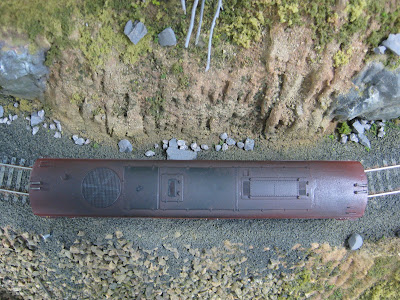 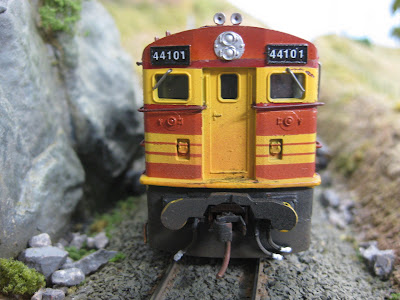 A triple unit lash up American style A+B+A
This combo ran at the Canberra and Hobsons Bay Exhibition when
BOLIVIA was displayed with no comment ! 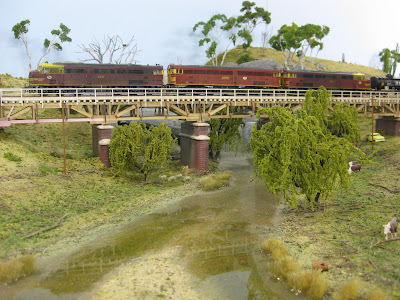 The loco used as a conventional loco on its own 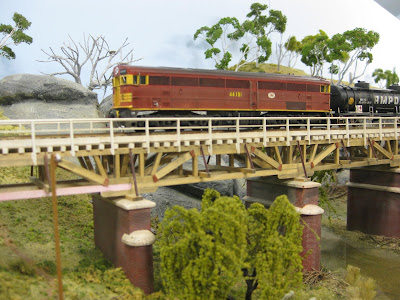 44101 makes an interesting addition to the loco fleet and as
an ALCO would of found its way to Bolivia. 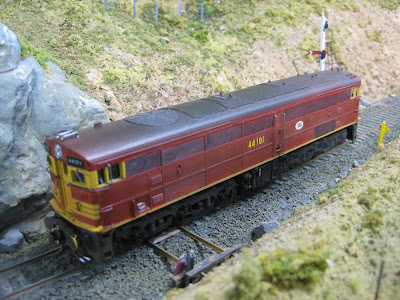 I would be pleased to hear from anyone who has any additional information and hopefuly some photos of this very unique loco.
Posted by BOLIVIA at 1:00 AM