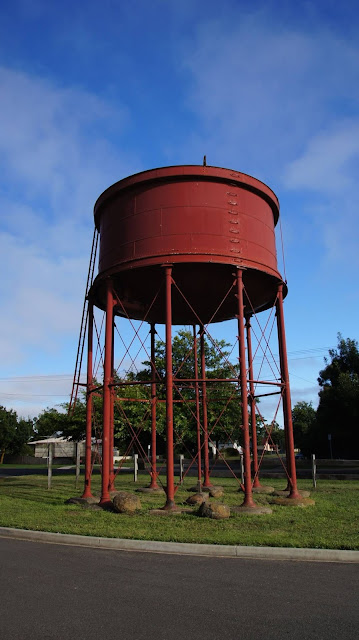 Upon careful examination of the plans for this it was reveled that the tank section has a remarkable resemblance to our NSW 20,000 gal tank . Both in design and dimension.
ALMOST THAT CLOSE THAT IF YOU DIDNT TELL ANYONE THEY WOULDN'T KNOW !
These NSW tanks refereed to as the type 1 wrought iron lipped tank.Where constructed with elaborate brick stands with semi arched windows and doorways.
In the 1890's between 1892 -1893 at Lismore , Byron Bay , Meranburn , Parkes , Forbes , Possum Power ( Springdale ) , Bobby Mountain , Cobar , Brocklesby , Corowa and Milsons Point .
Two more less elaborate versions where constructed at various sites after these dates.
With this information I had some legless tanks made .
Here is a link to the Victorian tank on there version of a brick stand.
http://vhd.heritagecouncil.vic.gov.au/places/1294

The TRAINBUILDER tank . The external and internal stirrup irons have to be removed , along with the inlet valve mechanism and the bottom outlet pipework . The level indicator is good apart from the float not being in the correct position to suite the external indicator . As a reverse indicator the float should be about half way up to match the indicator. 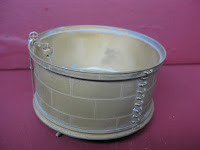 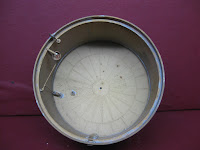 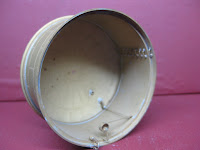 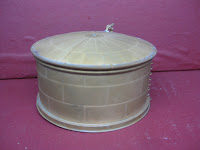 And then of course I needed the brick support structure to suite.
Byways of Steam No 2 and AJRM  No 9 have articles on these tank which together with some pictures I took of the Byron Bay tank on 15-8-2010 gave me enough information to construct the master for the stand. 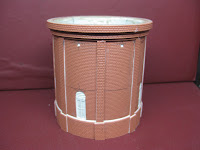 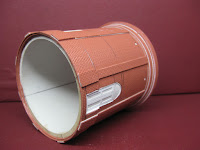 The completed master with unmodified tank on top 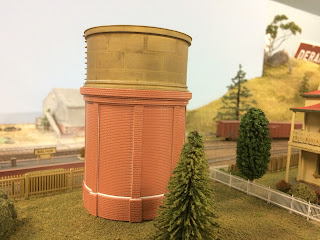 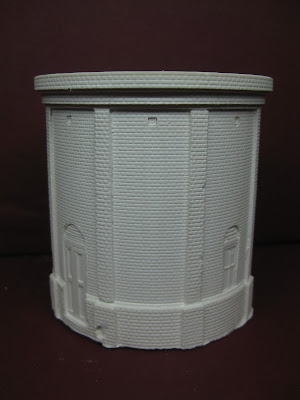 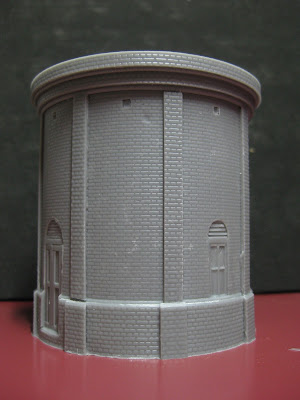 The completed tank with stand

I painted the stand with badger Light Tuscan Oxide red . Then with a very small brush added some diluted matt white to form the mortar lines ,by touching the end of the brush to the mortar lines and letting it run along
Then some brushed weathering.
The tank was painted with Model Master ,Dark Anodonic Gray Buffing Metalizer .Which is for air brush only ? .But I used a small brush to try to get that painted with a brush in real life look , or a not to even look.i Also use this on my steel bridge structures for that grey slightly silver speckle look the paint had.
The inside received the same treatment . Then weathered with rust and green for moss .For the rust I use Model Master ,1736 leather which is a good replacement for Floquil rust
I haven't decided on the water effect yet, But this may not be needed depending on the tanks final location.
The window frames and door where painted matt white . but I'm not sure what to do to represent the glass ? 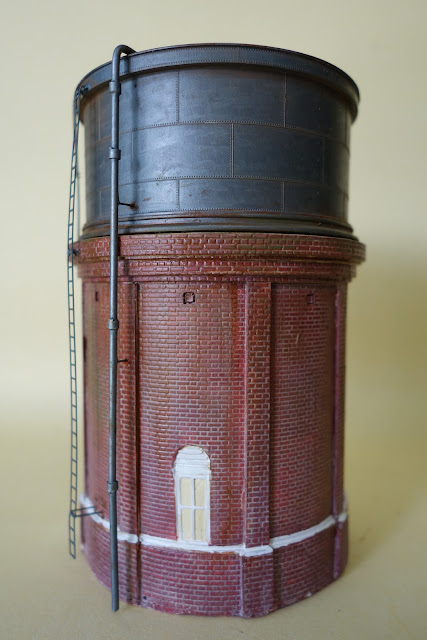 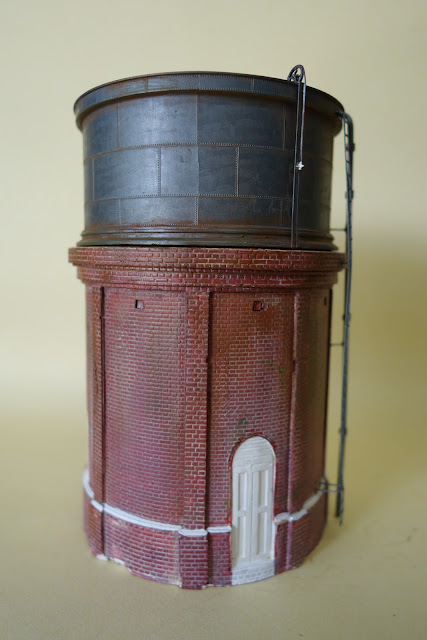 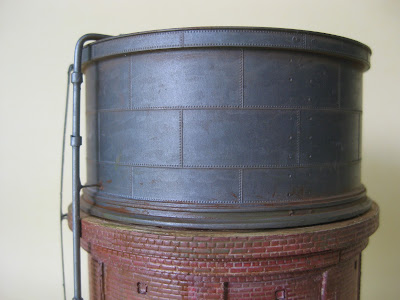 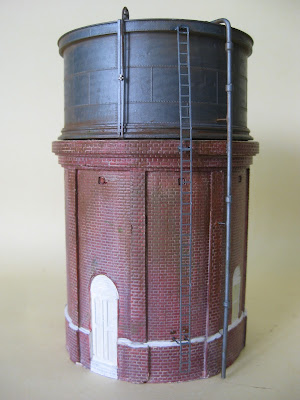 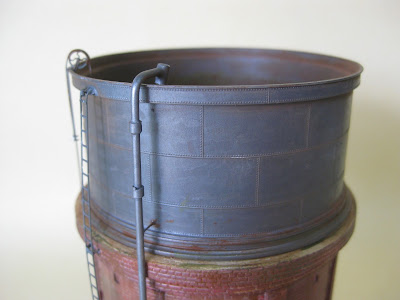 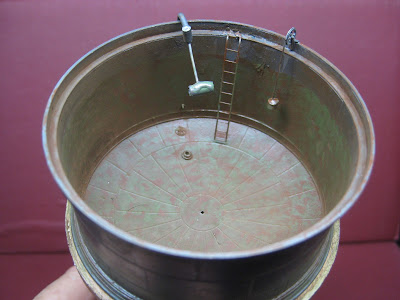 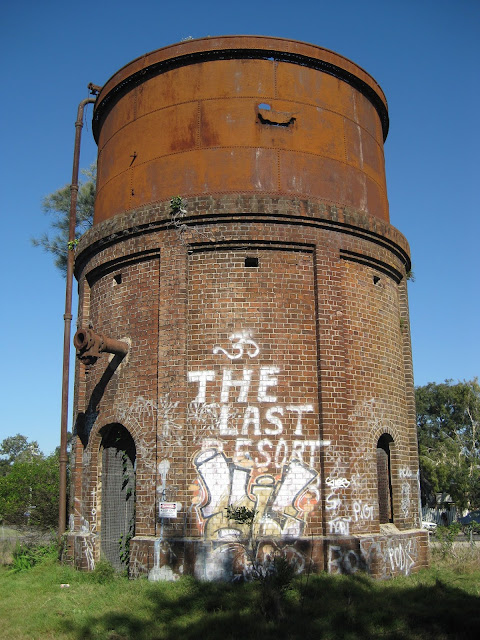 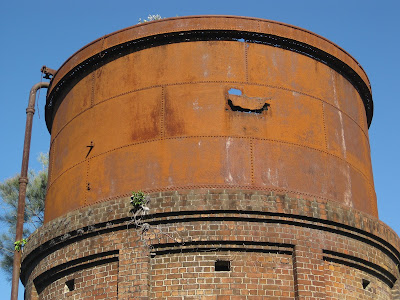 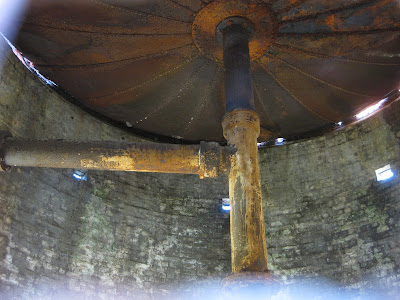 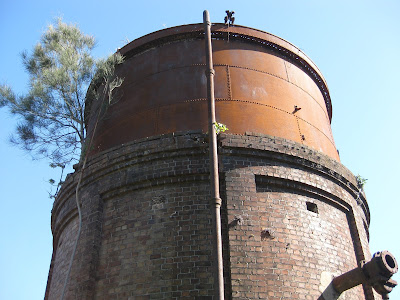 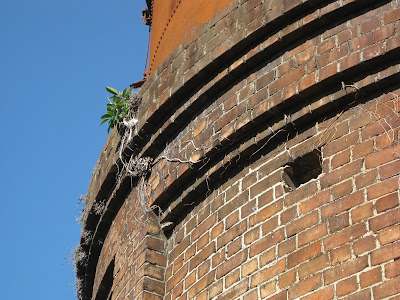 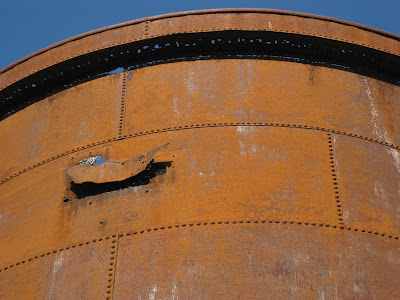 Pictures from Greame Henderson of the Meranburn Tank
Showing the inside rusted colour and the external faded silver finish . 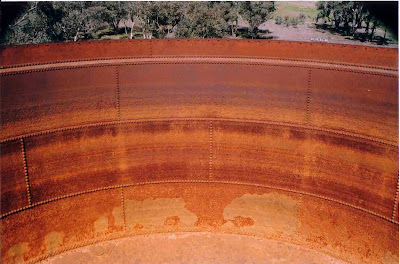 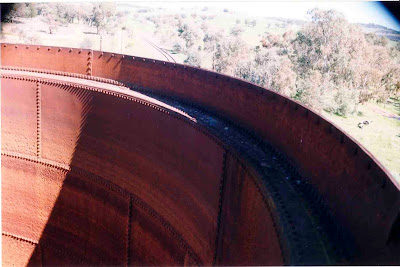 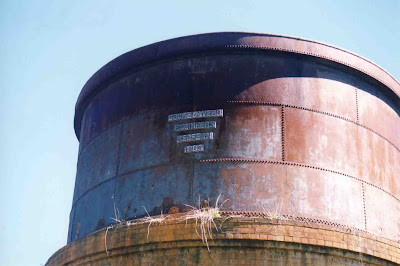 These tanks are a great structure for a railway as the tank can either be line side with a swivel jib
Or somewhere inside the railway boundary serving a water column at the line side.
I'm almost certain I recently saw an old picture of the Lismore tank taken from the North looking South , that showed a water treatment plant balanced on the top edge of the tank . At the time I though I will remember where that is a put a link in to the picture . But now I cant find it .
In Byways 18 page 178 there is a photo of this arrangement on the Murwillimbah tank ,which of course is one of the other designs.
I do have a few available of the unfinished tank and stand if you would like one PM me.