BINIGUY C DEPOT SHOWING THE EASTERN END OF THE STRUCTURE.

Most people don't realise Shakespeare was an avid NSW  modeller .And was perplexed with the age old question of what type of silo to model.Although he was more transfixed with the B style type.
I have the same problem .
Well with modelling MUNGINDI and all ,and with 2.1 mtr modules and very flat terrain the need for some way of hiding the back board becomes increasingly difficult .
I have always been impressed with the vast size of some wheat silos in these small towns and so I have been doing a lot of head modelling.A past time where you go through all the possibilities and different ways you can create the desired scene in your head.This way no one gets hurt.
Some people never progress past this point!
So with tape in hand and a stop on a work trip the silo at BINIGUY was measured up.
This silo was constructed in 1965 as a C depot of 40,900 Tonnes capacity. NORTH STAR has the same silo but with some variations .
Once back home the calculations revealed if a half width by full length model was produced to hide the back board I would need a base board 400mm x 2.1 mtrs long .Which would be good as the modules are 2.1 mtrs long.

BASE BOARD ON LAYOUT MODULE
Station area is to the left of board .But board will be moved by 1 third to the right t create more station room 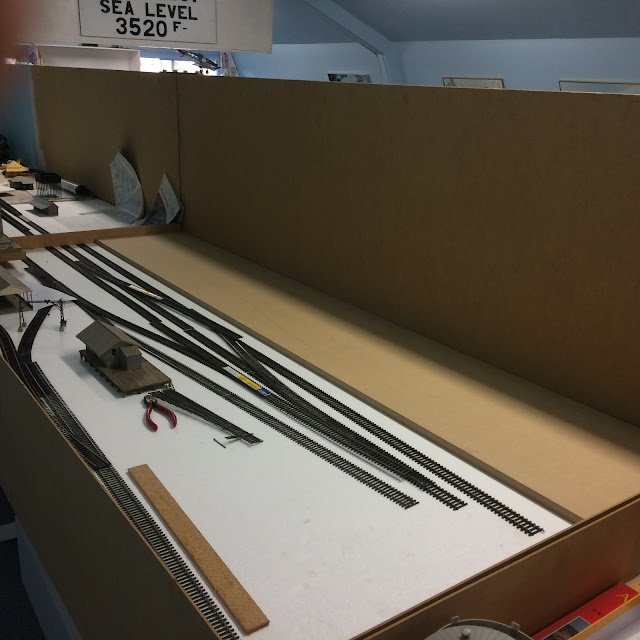 A board was cut and then after a lot of shuffling  around with the structures I wanted to be at MUNGINDI it was discovered that the silo would have to be in 2 sections 2 thirds  on 1 baseboard the other third on the next ,to allow enough room for the station building.Which meant moving the bridge further south (which is also 2.1 mtrs long)
That,s why I never plan any thing in to much detail as a well drawn plan doesn't always translate to a ideal modelling proposition.
So the other good thing about a C depot is its a lot of the same sections repeated.So a master was made for the side scalloped concrete walls complete with down pipes and cast up.A 3 bay section was made although the silo is made in thirds with an different number of sections per third .The castings where cut and shut to suit. 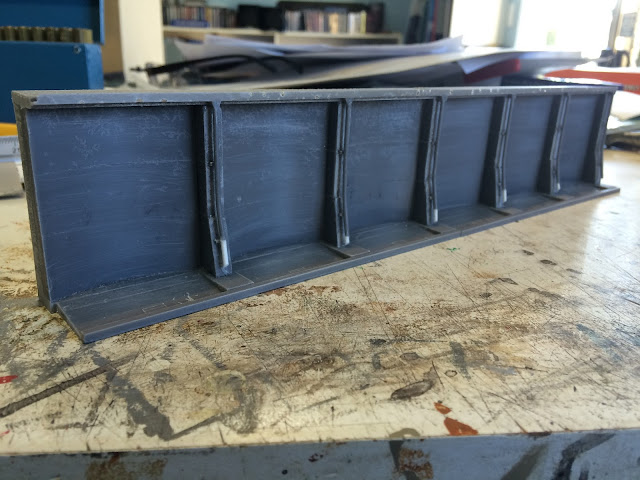 The profiles where cut from Custom wood.Here showing the ridge line peak and the elevator tower with louver sections cut out awaiting the casting for these.A wheat wagon gives an impression of the size
Although the wheat siding  track is actually out from the board.The trucks run along the side of the silo to access the receival shed on the side of the silo in front of the elevator. 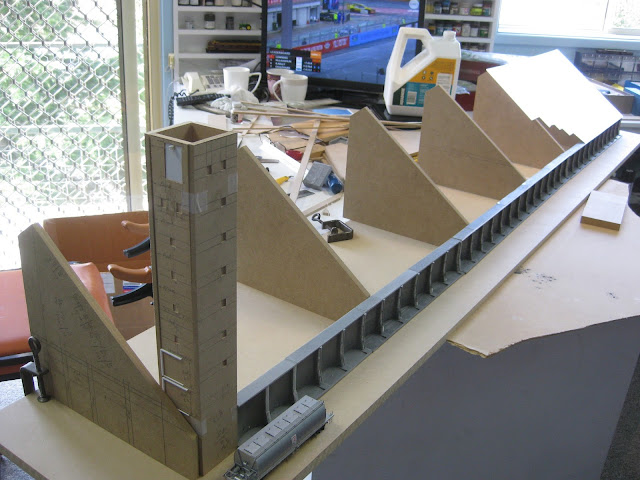 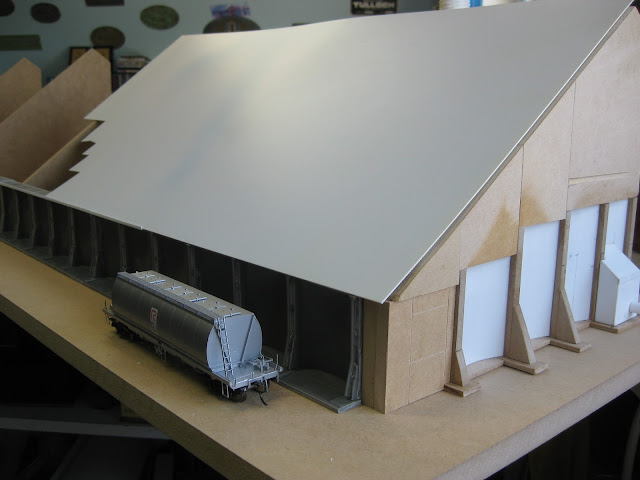 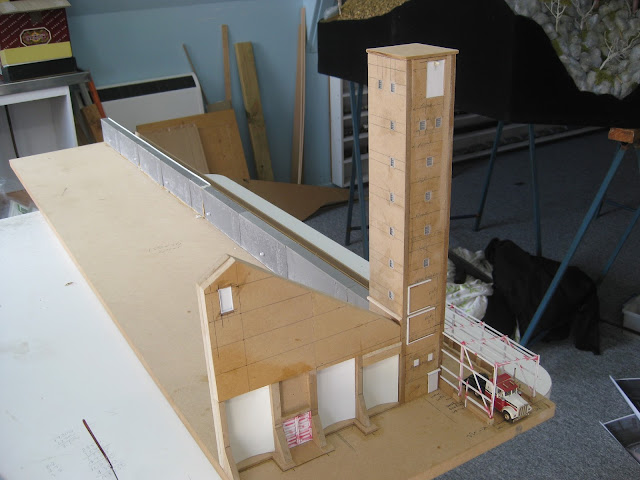 ELEVATOR WITH CONCRETE EFFECT BEFORE  PAINTING 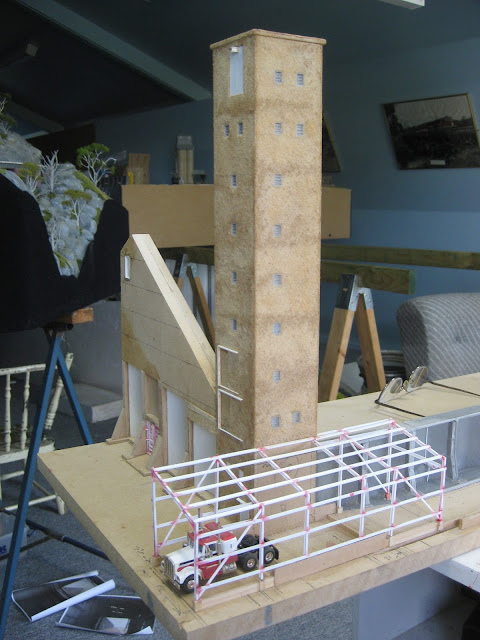 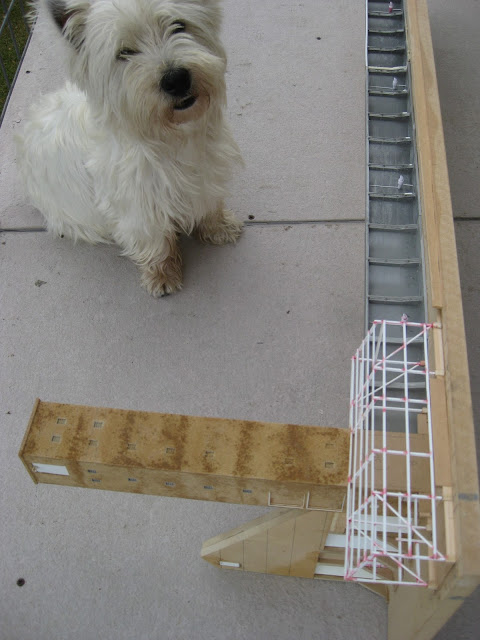 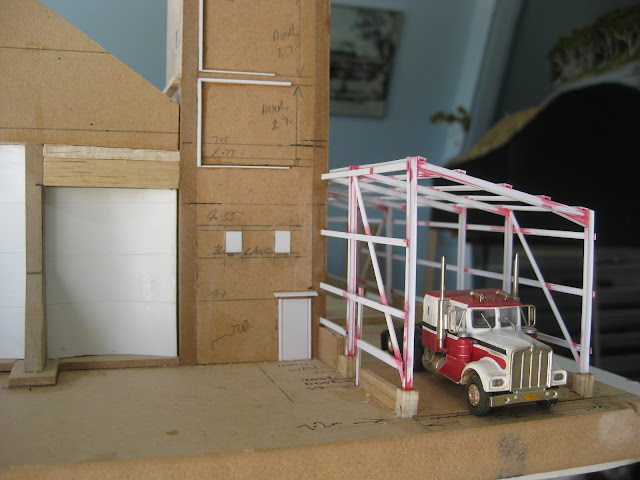 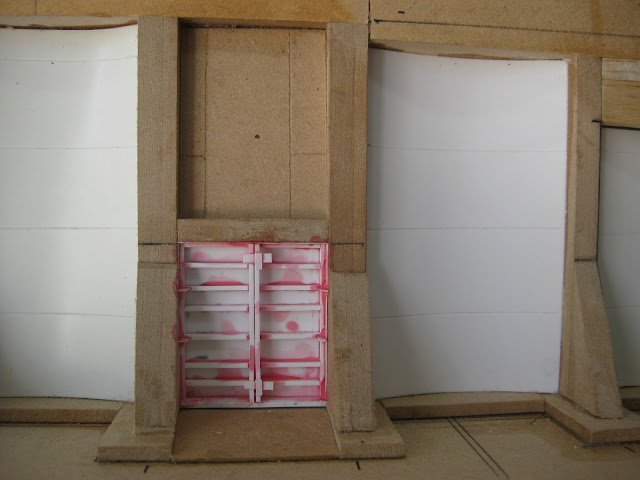 LOUVER CASTINGS IN PLACE WITH CONCRETE EFFECT ON PART OF WALL 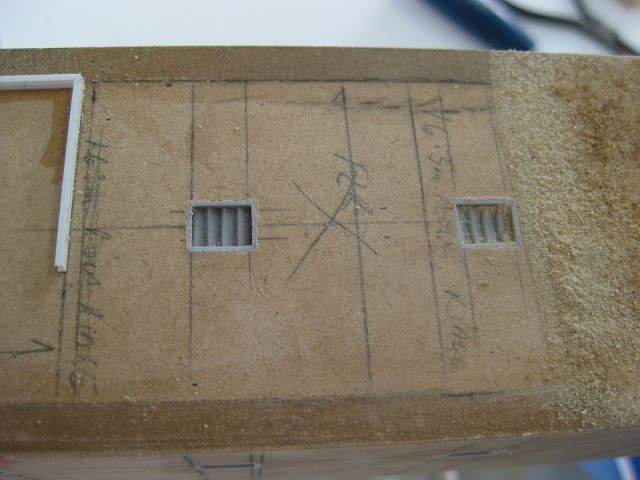 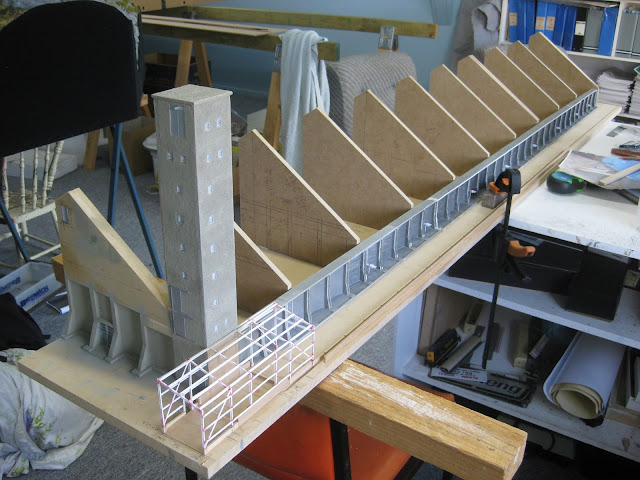 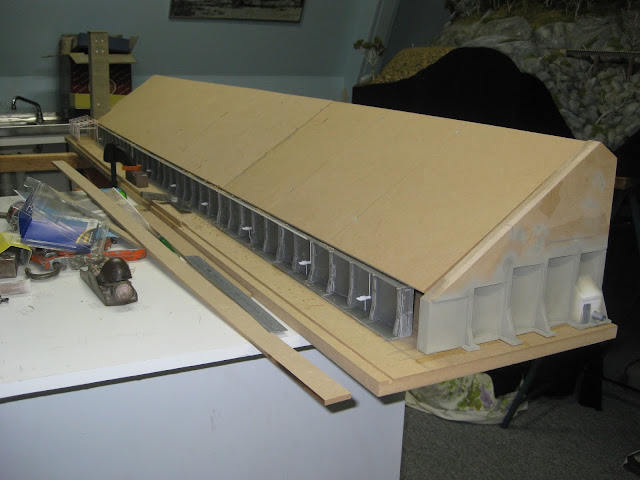 WESTERN END WITH ROOF ON 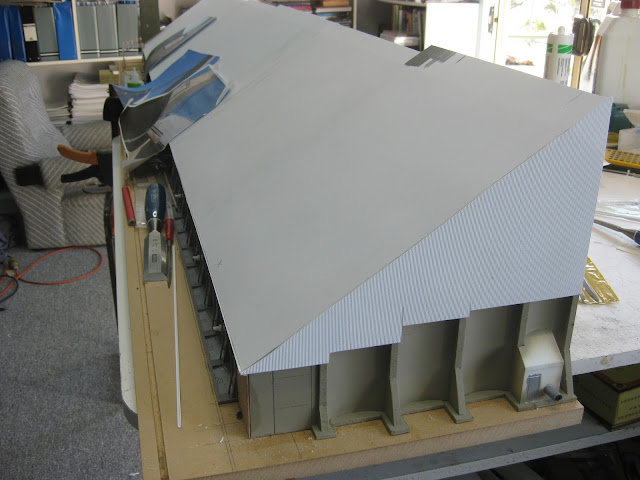 ELEVATOR END WITH MOST OF ROOF ON AND CONCRETE EFFECT 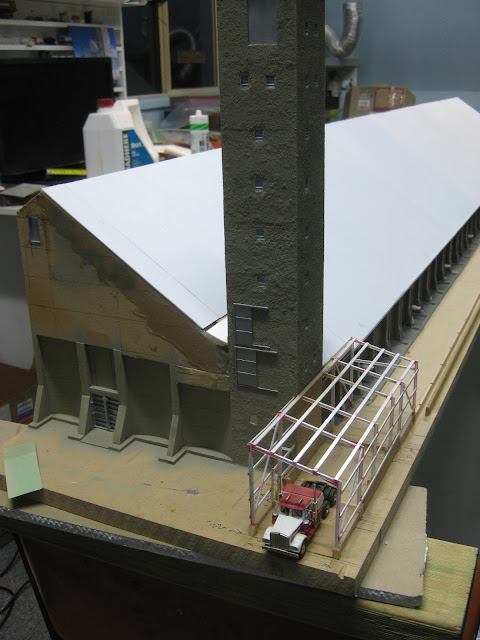 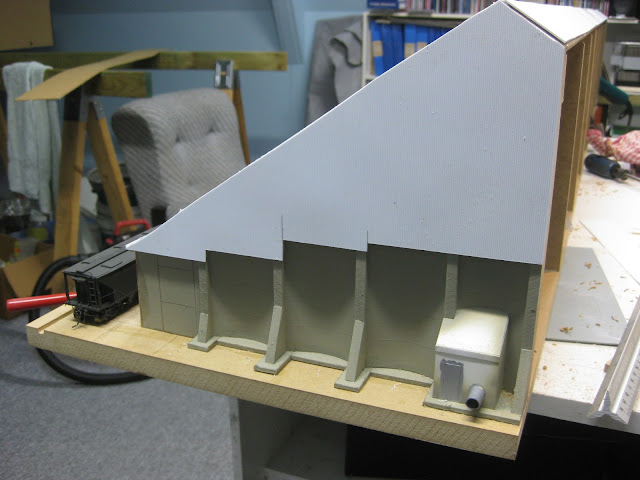 ALIGNMENT METHOD FOR THE 2 SECTIONS 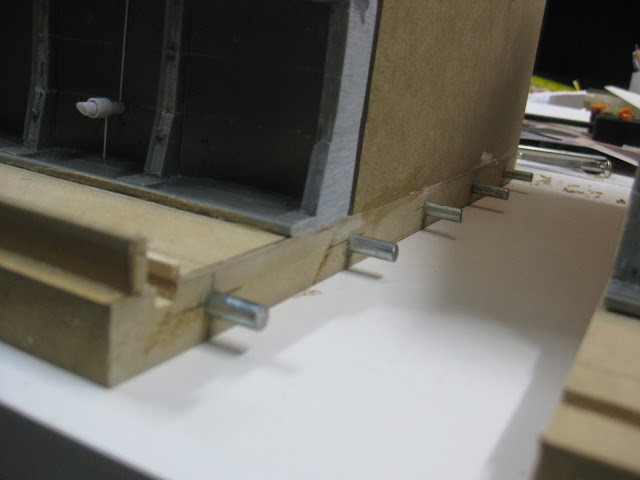 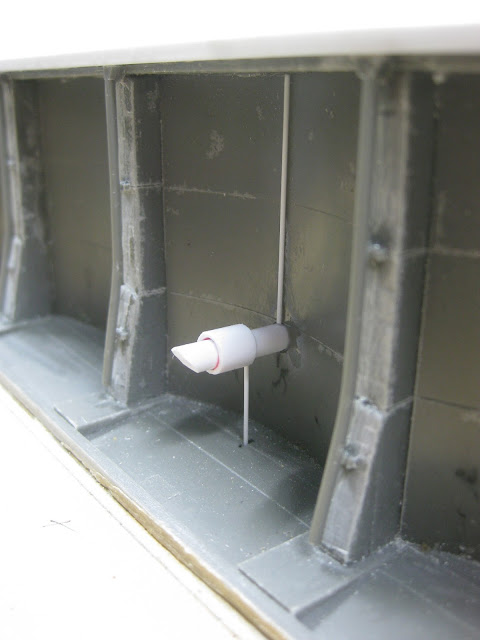 I have finished painting the silo now but will wait until i have the recievals shed finished to show this.