While researching Army rail movements , equipment and such (remember the post Military Might ) I got side tracked .How easy is that to happen !
So I thought I would share it with you .
Back in 1918 the Germans where using the Little Bertha a 28 centimetre (11 inch ) standard gauge rail mounted gun to shell the Amiens rail marshalling yard on the Villers-Bretonneux front in July August of that year.
This rail gun was 72 ft long and weighed 185 tons when fully operational the barrel alone weighed 45 tons.With the shells 704 lbs each.
Built by the Krupps works using a 1904 naval gun and modified into the purpose built rail carriage .Used for transport and also as an operation platform .
The gun was captured  in a large advance on 8th August 1918.When sappers from the 8th field Company  Engineers along with the 31st battalion advanced to secure the new front line .The train was discovered intact but with the rear portion on fire .
Sapper Les Strahan who was a driver for the W A Railways , raised steam and the train was brought back from the new  front line complete with ammunition  ready to fire . 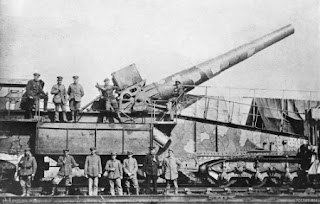 Gun with German crew before capture


The gun was exhibited in Paris then shipped to England where it was examined at the Woolwich arsenal .Then shipped to Australia being offloaded at Jones Bay , Darling Harbour by the floating crane Titan direct onto the rails . 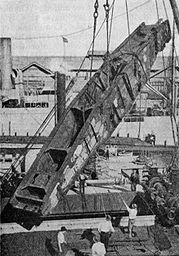 A section being offloaded

Then hauled to Eveleigh Workshops before being moved by a super heated T class to Station East Box ,where it was pushed forward onto prepared track at Eddy Avenue via a ramp. The axle load 18.5 tons caused several problems with the temporary track and the bogies derailing .
The gun was floodlit at night and moved to Canberra in 1923 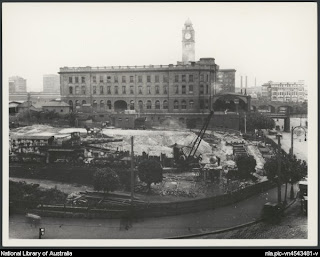 The activites at Eddy Avenue 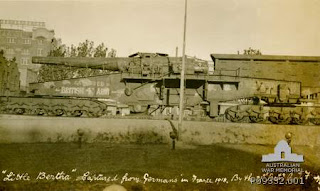 No details of the movement to Canberra are known but the gun would of had to be partially dismantled for the journey.
In 1927 the gun was moved from near the Kingston Power Station to the Canberra Station using a 100 yard long temporary spur line.
The gun remained there until 1942 when the Department of Munitions claimed  the gun mounting for the war effort for testing at the Artillery test range at Port Wakefield SA.The gun mount was sent by rail and the bogies went to Bandiana VIC for storage with the Barrel staying in Canberra.
By 1954 the mount was no longer required , but the Australian War Memorial decided the costs involved to move all the parts and reassemble the gun were to much ,Deciding to keep the barrel only.
The bogies were sold off as scrap in 1961 with the gun mountings scraped in 1963.
So for anyone with a scale model of Central Station a WW 1 German Rail Gun wouldn't go astray.


And so ends the sagger of LITTLE BERTHA. 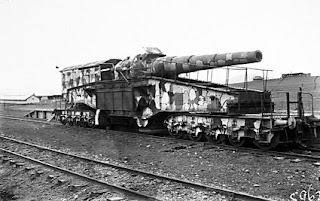 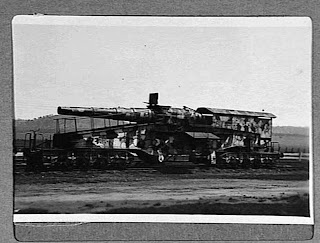 http://www.ctie.monash.edu.au/hargrave/duigan_3squadron_04.html
Posted by BOLIVIA at 10:22 PM